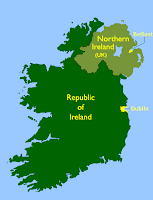 Martin Ruhs and Emma Quinn have just released a detailed report for the Migration Information Source describing the current challenges confronting Irish immigration policies. Ireland's relationship with migration is an unusual one. Historically famed as a country of emigrants, Ireland's financial boom during the 1990s led it to become a country of net immigration for only the second time in Irish history. Immigration flows increased from under 20,000 people per year in the late 1980s to over 100,000 people per year in 2006; over the same time period, emigration levels dropped from a high of over 60,000 people per year to just over 30,000 people per year. But then the financial crisis hit, and immigration numbers dropped dramatically (down to just over 80,000 in 2008) while emigration numbers slowly increased (to over 40,000 in 2008). As Ireland's unemployment rate -- a central cause of prior emigration flows -- increases, its immigrants will confront serious challenges that may be compounded by policy decisions made in response to the immigration spike of the early 2000s.
Faced with an unprecedented increase in immigration in the late 1990s, Ireland took several steps aimed at managing immigrant flows. First, it instituted a "safe country of origin" element into the asylum determination process. Though entirely without basis in international law or in the realities of persecution, such policies create a presumption that asylum seekers from "safe countries of origin" do not need protection and subject these applicants to expedited decision-making processes. Combined with legislation making carriers liable for transporting unauthorized migrants, this program led to a decline in asylum applications in Ireland after 2002 (a drop that coincided with declines in asylum applications throughout the developing world, likely linked to stricter border control policies in the wake of September 11).
Ireland also stepped away from its traditional jus soli citizenship policy that granted citizen status to anyone born in the country. Because the non-Irish parents of children born in Ireland could then apply for residence based on their child's Irish citizenship, Ireland amended its constitution to change its citizenship laws. Under the new policy, the Ireland-born children of non-Irish nationals obtain citizenship only where one of their parents resided in Ireland legally for three of the four prior years -- and asylum applicant status is not considered to be lawful for this purpose. Parents who meet these standards are eventually eligible for citizenship, but the process i

s significantly slower.
Unsurprisingly, the financial crisis has hit migrants harder; their unemployment rate in early 2009 was nearly 15%, compared to nearly 10% for Irish nationals. In the same time frame, migrants comprised nearly 16% of the Irish labor force, employed primarily in fields such as construction and retail trade that were most impacted by the crisis. While some efforts have been made to integrate immigrants, including the creation of a Junior Ministry for Integration in 2007, labor market discrimination and the barriers to obtaining lawful status described above remain. For migrants from within the European Union, these obstacles are less problematic, as they can return to their home countries and wait out the financial crisis. For non-E.U. migrants, the options are bleaker. And for Ireland, its hasty attempts to address a spike in migration may soon push it back down the path of net emigration.