Look On! Kids hopping trains to the U.S.

(Look On! takes occasional note of noteworthy films.) Everybody's talking about Which Way Home, the documentary about children from Central America who ride alone atop trains in their bid to make it to the United States. Directed and produced by Rebecca Cammisa, the film recently made its television début on HBO. (photo credit)
Many of us have written about unaccompanied minors; among them, IntLawGrrl Jaya Ramji-Nogales, in this post.
The United States has been particularly cognizant of the issue in recent years, inviting testimony before Congress on the perils of unaccompanied minors who were then being placed into adult detention -- that is, prison -- facilities. More recently, Congress addressed the issue within the 2008 Trafficking Victims Protection Reauthorization Act, which included several provisions directing federal funding and resources to children (most often unaccompanied) who are subjected to various forms of human trafficking.
I have not yet seen the film, but The New York Times article about the movie states that it follows several boys from Honduras, passing through Mexico on trains and hoping to enter the United States to work or meet family members there. Having written and thought a great deal 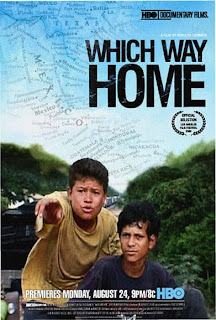 about human trafficking, as have other 'Grrls, such as Janie Chuang, I cannot help but wonder what will befall these children. If they make it to the United States, will they be detained? Will they fall into the hands of traffickers? If they do not make it to the United States, Mexico will most likely deport them. If they are not wanted by their families, or are victims of domestic violence, will Honduras protect them?
Several years ago, my students and I won asylum for a child from Honduras. His case was granted with a rare written opinion, in which the judge accepted the argument that his stepfather's abuse and the Honduran government's unwillingness to protect him constituted persecution. The judge was right. We had argued that Honduras had ratified the Convention on the Rights of the Child, and in so doing had taken on affirmative obligations, but that Honduras nevertheless had failed to fulfill those obligations, ultimately leeaving our client unprotected. Typically, however, domestic violence claims have been denied in the country.
As IntLawGrrl Amy Senier posted a while back, U.S. Attorney General Eric H. Holder Jr. has decided finally to issue regulations on gender-based asylum claims. With this decision, an opportunity presents itself. Unaccompanied minors might avoid detention, find pro bono counsel and apply for special immigrant juvenile status, or even be granted asylum in the United States under the theory that their home country was unwilling or unable to protect them from domestic violence.
I look forward to seeing Which Way Home, but I look forward even more to seeing children like those depicted in this movie receiving some much-needed protection.

by Dina Francesca Haynes at 6:05 AM