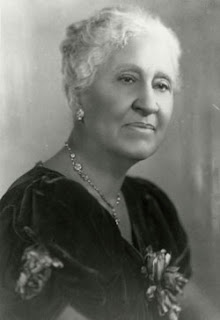 As today's guest blogger at IntLawGrrls, I would like to dedicate my contribution to Mary Church Terrell (left).
Born on September 23, 1863, in Memphis, Tennessee, Terrell was a women’s rights activist, peace activist, and civil rights leader:
► In the United States she became known, among other things, for her activism and leadership in the suffrage and desegregation movements. She was the 1st president of the National Federation of Colored Women and a charter member of the National Association for the Advancement of Colored People. (photo credit)
► Internationally, Mary Church Terrell became known around the world for raising awareness through her speeches about the situation and achievements of African Americans. She was the vice president of the International Council of Women of the Darker Races, as well as a member of the American delegation to and a speaker at the International Congresses of Women in Berlin, German,y in 1904 and 1919. Mary Church Terrell was also chosen by the International Women’s League for Peace and Freedom as a speaker at the 1919 Quinquennial International Peace Conference in Zurich, Switzerland. In 1937, she delivered an address before the International Assembly of the World Fellowship of Faith in London, England.
Terrell was the author of numerous articles and short stories on segregation and the disenfranchisement of African Americans in the United States and, in 1940, she wrote her autobiography, A Colored Woman in a White World.
She worked consistently for a better future for all. As she said in a speech before the National American Women's Suffrage Association on February 18, 1898:

With courage, born of success achieved in the past, with a keen sense of the responsibility which we shall continue to assume, we look forward to a future large with promise and hope.

Terrell died at age 90, at her home in Maryland, on July 24, 1954 -- 2 months after the U.S. Supreme Court held racial segregation of schoolchildren unconstitutional in Brown v. Board of Education.