'No one would ever boo Obama'

On Tuesday, my 11-year-old son joined children across the country in what ought to become annual back-to-school tradition: He watched intently as the President of this United States extolled the virtues of hard work and diligent study as means to the fulfillment that comes with education.
"Obama was pretty good," my son said.
"Did anyone boo when he told you to do your homework?" I asked in jest.
My son's quick reply:
"No one would ever boo Obama."
A 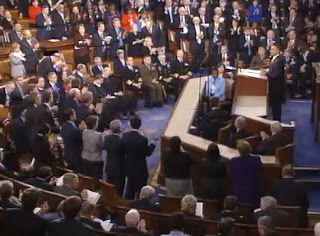 day later, some adults proved less in control of themselves than the average American middle-schooler.
President Barack Obama took his promise to reform health care to Congress last night (right). His speech was serious stuff -- dead serious, as anyone caught in the crucible of the U.S. health system well knows (prior post).
Congress responded with an absence of decorum that rivaled the most raucous Westminster backbenchers.
Just 2 examples out of many detailed in this Washington Post article by Dana Milbank:
► "You lie!" U.S. Rep. Joe Wilson (R-S.C.) blurted in response to Obama's assertion that his plan would not cover illegal immigrants. He spat the words so loudly that they were fully audible in TV rooms everywhere.
► "Rep. Al Green (D-Tex.), also on the GOP side of the aisle, felt the need to pound his fist in the air and make what looked, awkwardly, like a fascist salute."
This from officials who owe a debt of trust to the public that elected them and pays their salaries. More of the same, on health and education, from others who've sought to skewer rational debate these long summer months. The nonsense underscores a point made first by Justice Holmes and repeated on this blog 2 weeks ago: Even the most basic of human rights are not won without a fight.
This one's a knock-down drag-out.
by Diane Marie Amann at 6:00 AM

Of course, what you left out of your comment was the fact that shortly before the Congressman screamed "you lie." The President of the United States said that the criticism leveled against the health care plan was "..a lie, plain and simple." Lesson learned, be civil, don't argue with the man with the microphone lest you be the one needing to apologize for what amounts to the exact same content, just leveled in a less than civil manner.

Ours is a political tradition in which the holder of the floor -- particularly the floor of Congress -- may speak without interruption. The time and place to object, if one believes objection merited, is after the fact.
"Question time" makes for lively political theater. It may even make deliberative sense in a parliamentarian system like that of Britain, with its rather different forms of mass communication and its placement of the roles of head of state and head of government in 2, not 1, person. But it is neither our tradition nor one that deserves importation to this side of the Pond.