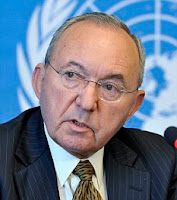 But above all, I accepted because I believe deeply in the rule of law and the laws of war, and the principle that in armed conflict civilians should to the greatest extent possible be protected from harm.