Although this genre of military commissions may disappear, as such, a national debate looms within government and outside among the press and public: should al-Qaeda adherents and 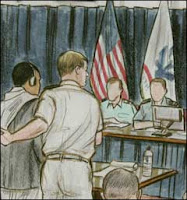 other terrorists accused of war crimes against the United States be tried in our regular civilian courts or military courts-martial or instead be relegated to military commissions or to special 'national security courts' which would operate under different rules as to openness, use of classified information, availability of privileges against self-incrimination and admissibility of evidence secured by coercive methods? Before giving serious consideration to the creation of a separate and less restrictive system of criminal justice for one group of defendants, we would do well to look at how this military commission experiment has played out so far and what if any lessons can be learned from its initial phase.

-- Patricia M. Wald (below left), in her Foreword to the Military Commission Reporter, available here and reprinted in the new edition of Green Bag 2d. Her essay introduces the newest publication service of the National Institute of Military Justice: the 500-plus-page Military Commission Reporter, volume 1 -- 1 M.C. -- a compendium of decisions of rulings issued between October 2006 and June 2009 by the Guantánamo commissions. (image credit) (The 1st issue of volume 2 is available online here.) Wald's foreword draws on her experience as

the Judge on the International Criminal Tribunal for the former Yugoslavia and as Chief Judge of the U.S. Court of Appeals for the District of Columbia Circuit in evaluating the operations so far of the Guantánamo commissions. A sample nugget:

'... I was struck by the almost hopeless lopsidedness of the process.'