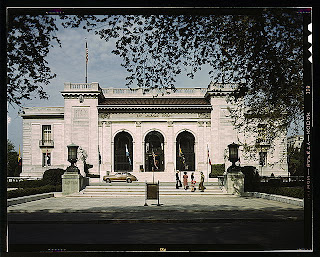 On this day in ...
... 1889 (120 years ago today), the 1st Pan-American Conference opened in Washington, D.C. The conference was a meeting between the United States and various countries in Latin America. U.S. officials had "hoped to reach agreements at the conference to create a customs union for free trade and establish a system for arbitration of international disputes." Their hopes were mostly dashed, in part due to mistrust and in part "due to the embarrassing fact that the Republican-controlled Congress was simultaneously working on legislation to strengthen tariffs." An International Bureau of American Republics, or Pan-American Union, was established to convene future meetings. (credit for 1943 photo of Pan-American Union building, now headquartesr of the Organization of American States)

(Prior October 2 posts are here and here.)
by Diane Marie Amann at 5:59 AM