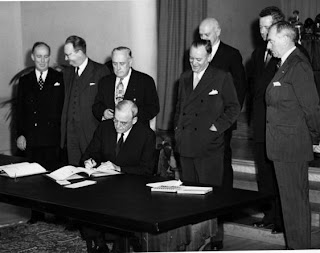 On this day in ...
... 1951, diplomats signed the Security Treaty between Australia, New Zealand and the United States of America, better known as the ANZUS Pact, at San Francisco, California (right). As detailed at the U.S. State Department's website, this mutual defense treaty, designed to ensure security in the Pacific region, did not include Great Britain notwithstanding the Commonwealth status of 2 states parties. However, Britain and the ANZUS states all joined the Southeast Asian Treaty Organization in 1954. Three decades later, "the ANZUS Treaty began to unravel when New Zealand declared its country a nuclear-free zone and refused to allow U.S. nuclear-powered submarines to visit its ports," a move that led eventually to U.S. suspension in 1986 of "its treaty obligations toward New Zealand." Bottom line:

Although the agreement has not been formally abrogated, the United States and New Zealand no longer maintain the security relationship between their countries.

(Prior September 1 posts are here and here.)
by Diane Marie Amann at 5:59 AM