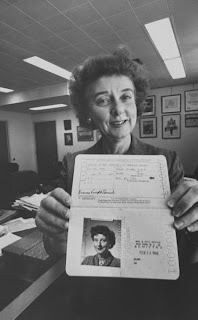 On this day in ...
... 1999 (10 years ago today), longtime State Department officer Frances Knight died at age 94 in a nursing home in Bethesda, Maryland. (credit for 1966 photo by Stan Wayman, (c) Life magazine, of Knight with her off passport) As described in her New York Times obituary, Knight

ran the United States Passport Office for 22 years with efficiency and conservative zeal, denying passports and entrance visas to those she regarded as enemies of the nation and surviving efforts to remove her and even mandatory retirement at 70 ...

Having been handpicked in 1955 "by her predecessor, Ruth Shipley, a staunch conservative who ran the office with unchallenged authority," Knight, who'd been born in 1905 in Rhode Island, eventually retired at age 72. The Times further noted:

Ms. Knight was also outspoken on equal rights for women. She often complained about the lack of women in high-ranking management positions in the State Department.

Knight's political detractors called her "'the ogress.'"
(Prior September 11 posts are here and here.)
by Diane Marie Amann at 5:59 AM