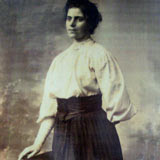 On this day in ...
... 1879 (130 yeas ago today), Annie Kenney (right) was born near Oldham, England, the 5th of 9 children. At age 10 she began the life of a "half-timer," working in a cotton mill in the morning and attending school in the afternoon; by age 13 she was a full-time machine operator at the mill. (photo credit) She began organizing early on, distributing to the girls with whom she toiled literature that ranged from Socialist newspapers to poetry. As depicted in this prior IntLawGrrls post, by 1905 Kenney had joined up with suffragist Christabel Pankhurst and the new Women’s Social and Political Union; Kenney was "the only working-class woman to become part of the senior hierarchy" of the mostly middle-class WPSU. Pankhurst wrote of Kenney:

'Evening by evening, after her day’s work, and on Saturday afternoons, she would take train to Manchester, make for our house and join in whatever work needed doing for the cause ...'

At an October 13, 1905, public rally for Liberal Party candidates -- among them Winston Churchill, who'd later switch parties and twice serve as Britain's Prime Minister --Kenney uttered these words of challenge:

'If you are elected, will you do your best to make women’s suffrage a government measure?'

Ignored, Kenney, Pankhurst, and their colleagues "unfurled a banner with the slogan 'Votes for women.'" Tossed out of the meeting, eventually they were charged with assault based on a police officer's claim that "the women had kicked and spat at him." (A copyright photo of Kenney being dragged away, at one of many such events, is here.) After a raucous trial, also discussed in this post, the women served sentences of several days in Strangeways Gaol. Kenney, who lost interest in politics during World War I, died in 1953.

(Prior September 13 posts are here and here.)
by Diane Marie Amann at 5:59 AM