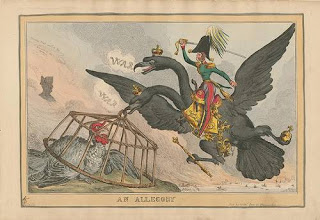 On this day in ...
... 1829 (180 years ago today), a years-long armed conflict between Russia and the Ottoman Empire ended with the signing of the Treaty of Edirne in the city of that name -- a city in modern-day Turkey that also had been known as Adrianople. Impetus for the war had been the intervention of Russia, allied with Britain and France, in Greeks' struggle for independence from the Ottomans. The treaty's "most important clause granted Greece complete independence"; on account of this and other provisions, the pact "marked another step in the decline of the Ottoman Empire," which would cease altogether after World War I. (credit for 1828 caricature by Briton William Heath, published during the war, depicting Russia's czar encaging a turkey)

(Prior September 14 posts are here and here.)
by Diane Marie Amann at 5:59 AM