... 1789 (220 years ago today), U.S. President George Washington signed a statute that changed the name of the United States' fledgling Department of Foreign Affairs to the Department of State (logo at right), and likewise renamed its head the Secretary of State. The law also added to the foreign relations duties of this unit of the Executive Branch some domestic responsibilities; specifically:

receipt, publication, distribution, and preservation of laws of the United States; custody of the 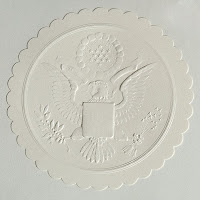 Great Seal of the United States; authentication of copies and preparation of commissions of executive branch appointments; and, finally, custody of the books, papers, and records of the Continental Congress, including the Constitution itself and the Declaration of Independence.

Jumping to mind is the 2009 book The Greatest Decision, mentioned in this IntLawGrrls post and reviewed here by our colleague Jeffrey L. Bleich. Decision tells the story of how the choice to lodge the Great Seal (imprint above left) (credit) at headquarters of the Secretary of State set the stage for events that culminated in the Supreme Court's landmark opinion on judicial review, Marbury v. Madison (1803).
(Prior September 15 posts are here and here.)
by Diane Marie Amann at 5:59 AM