On this day in ...
... 1899 (110 years ago today), a daughter was born in Kiev, then part of Russia (now Ukraine), to a mother "who was a freethinker" and a father who "advocated equal rights for women." Within years the father, who worked in the lumber and building industry, left his family for the United States. His daughter "felt deserted by her father's departure and was so traumatized that she stopped talking for six months." The family joined him 1904 and lived comfortably in Maine. Marrying a New Yorker soon after high school, the daughter, known by her married name of Louise Nevelson (above left), studied art and gave birth to a son. After she and her husband separated in the 1930s, Nevelson, who was Jewish, moved to Munich, Germany. There she studied art until the Nazis closed the school. 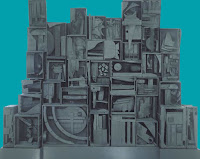 Returning to the United States, she taught art at a program funded by the Works Progress Administration and began showing and selling some of her sculptures. She won acclaim for her abstract expressionist pieces (right), some of which evoked the Holocaust. "A pioneering grand dame of the art world," Nevelson died in New York in 1988, a few months shy of her 90th birthday.
(credit for photos)

(Prior September 23 posts are here and here.)
by Diane Marie Amann at 5:59 AM