On this day in ...
... 1969 (40 years ago today), in a federal courtroom in Chicago, jury selection began in the trial of 8 men indicted on charges of conspiracy and crossing state lines to incite riots at the Democratic National Convention held in the same city 13 months earlier. Judge Julius Hoffman rejected the requests of defense attorneys for what came to be known as the Trial of the Chicago 8. (It would be reduced to 7 (above right (credit)): the case of defendant Bobby Seale, a Black Panther leader, was severed after he had spent several court days bound and gagged (below left (credit)) by order of the judge). To tease out jurors' "cultural bias" the defense proposed questions like these: 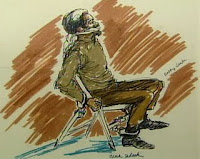 'Do you know who Janis Joplin and Jimi Hendrix are?'
'Would you let your son or daughter marry a Yippie?'
'If your children are female, do they wear brassieres all the time?'

The only question allowed:

'Are you, or do you have any close friends or relatives who are employed by any law enforcement agencies?'

That was the 1st of many contested judicial decisions in the course of a bizarre 5-month trial before a jury that comprised "two white men and ten women, two black and eight white." The judge's behavior would prompt the U.S. Court of Appeals for the 7th Circuit, in United States v. Dellinger (1972), to reverse the convictions of the 5 men whom jurors had found guilty; they were Abbie Hoffman, Jerry Rubin, David Dellinger, Tom Hayden, and Rennie Davis.
(Prior September 24 posts are here and here.)
by Diane Marie Amann at 5:59 AM