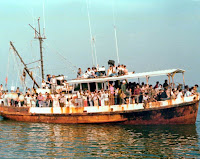 On this day in ...
... 1980, Cuba ordered vessels in Mariel Harbor to leave without refugees, thus putting an official end to a "boatlift" by which 125,000 persons had come to the United States. President Jimmy Carter learned of Cuba's unilateral decision to stop the 8-month boatlift (left) "only after the Coast Guard received word from boat captains returning from Cuba" to the United States. (photo credit) Carter initially had welcomed the refugees, according to The New York Times, but later backed away from what a State Department official called an "'illegal, disorderly and dangerous flood of Cuban refugees.'" A crewmember on a turned-back boat told a UPI reporter:

'Everybody in the harbor was crying.'

(Prior September 26 posts are here and here.)
by Diane Marie Amann at 5:59 AM