On this day in ...
... 1962, the publishing house of Houghtom Mifflin issued Silent Spring, a book that a Time cover story credited with "Breaking the Silence on DDT." Preceding publication of the work by biologist Rachel Carson had been excerpts in the New Yorker; her allegations that DDT and other 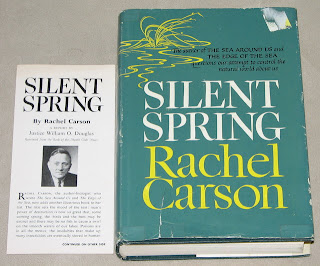 pesticides were being overused to the point that they had become "Elixirs of Death" had so disturbed chemical manufacturers that they threatened to sue to block publication of the book. In Time's words:

When the book appeared, industry critics assailed 'the hysterical woman,' but it became an instant best seller with lasting impact. It spurred the banning of DDT
in the U.S., the passage of major environmental laws and eventually a global treaty to phase out 12 pesticides known as 'the dirty dozen.'

Carson died from breast cancer 2 years after publication and well before adoption of the treaty mentioned above, the 2001 Stockholm Convention on Persistent Organic Pollutants. A 2007 National Public Radio broadcast, marking the centenary of her birth, detailed how, decades after Silent Spring appeared, Carson's "work continues to stir up controversy on Capitol Hill." (credit for Book-of-the-Month Club edition, including approving "report" on the book by U.S. Supreme Court Justice William O. Douglas)
(Prior September 27 posts are here and here.)
by Diane Marie Amann at 5:59 AM