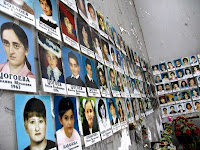 On this day in ...
... 2004 (5 years ago today), a lethal siege at a school gymnasium in the Russian republic of North Ossetia ended with explosions inside, while outside, "hostage-takers deliberately fired at the backs of fleeing children as they ran from the building in Beslan, many of them naked and screaming." More than 1,000 persons were believed to have been held in the 3-day standoff between government troops and hostage-takers believed to be "linked ... to Russia's bloody war with neighbouring Chechnya." Well over 300 persons were killed, nearly 200 more missing. (photo credit) The man believed to be the only surviving hostage-taker, Nur-Pashi Kulayev, was convicted and began a life sentence in 2006.

(Prior September 3 posts are here and here.)
by Diane Marie Amann at 5:59 AM