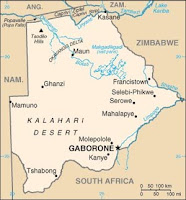 On this day in ...
... 1966, a region in southern Africa about the size of the U.S. state of Texas, which had been known since 1885 as the British protectorate of Bechuanaland, declared itself the independent state of Botswana. Elected under the terms of the 1965 Constitution was the 1st President, Seretse Khama, who served by re-election until his death in 1980. The country enjoys "flourishing multiparty constitutional democracy."

(Prior September 30 posts are here and here.)
by Diane Marie Amann at 5:50 AM