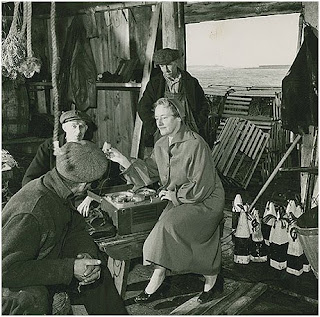 On this day in ...
... 1899 (110 years ago today), Helen Creighton was born into "a very socially prominent family" in Dartmouth, Nova Scotia, Canada. Contrary to what was expected of "young ladies" of the day, she earned a music diploma a McGill University and later graduated from Halifax Ladies’ College. After a brief stint as a social worker, she went to Mexico to teach in the American School in Guadalajara, then returned to Canada and became a writer and radio-reader of children's stories. "In 1928, she started on the most important work she would eventually be known for": collecting 40,000 items of Nova Scotia's folklore. Walking through the province, she gathered stories and songs from the Gaelic, Acadian, Mi'kmaq, English, German, French, and African-Nova Scotia cultures. (credit for 1954 photo of Creighton, center, in process of recording) Her methods varied from using a melodeon to recording via wax cylinders, acetate disks, and, eventually, audio tapes. The author of 13 books, Creighton received many honors and honorary degrees in recognition of her work, which she continued until her death on December 12, 1989.

(Prior September 5 posts are here and here.)
by Diane Marie Amann at 5:59 AM