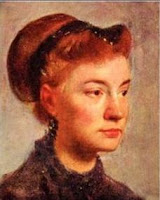 On this day in ...
... 1829 (180 years ago today), Dr. Marie Zakrzewska (left) was born in Berlin, Germany, into a family that once had held wealth and title in Poland. Her grandmother a veterinary surgeon and her a midwife, Zakrzewska studied and taught midwifery in Germany before emigrating in 1853 for the United States. After graduating from medical school in Cleveland, Ohio, she cofounded New York Infirmary for Women and Children with 2 other pathbreaking physicians, Elizabeth Blackwell and Emily Blackwell. (credit for circa 1860 portrait of Zakrewska) Zakrzewska taught obstetrics at the New England Female Medical College and then, in 1862, founded the New England Hospital for Women and Children in Boston (now the Dimmock Community Health Center), the 1st hospital that included a nursing school and the 2d U.S. hospital managed run by women physicians and surgeons. An abolitionist as well as a feminist, Zakrzewska, recently featured at ImmigrationProf Blog, also "pioneered the movement that opened the nursing profession to black women." She died in 1892.

(Prior September 6 posts are here and here.)
by Diane Marie Amann at 5:59 AM