Many thanks to IntLawGrrls for this giving me this opportunity to appear as a guest blogger especially on a topic that is close to my heart – finding solutions to global warming. 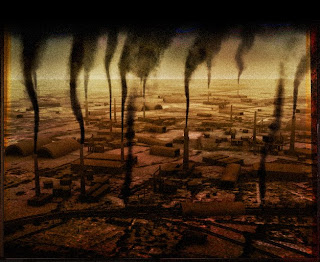 I am an intellectual property lawyer, and in the course of my research I wondered whether intellectual property law can do something to alleviate the global warming problem. It has now almost become trite to say that this is one of the most pressing problems we are facing. Very few would also now deny that humans are the cause of this greenhouse effect and the correlated climate change. What has not been much noted so far is that this extraordinary release of greenhouse gases in the earth's atmosphere may be due in major part to our patent laws.
Indeed, the main goal of patent laws is to incentivise industrial and technological development. This, in turn, creates pollution, including the release of greenhouse gases. (photo credit) The question underlying my scholarship, therefore, is whether patent law should play a role in the protection of the environment and, more specifically, in the cooling of the planet.
The question itself raises questions:
► 1st, Do patent justifications accommodate this goal? This is the subject of an article of mine, “Patent's role in the protection of the environment: re-assessing patent law and its justifications in the 21st century,” that recently appeared at 40 International Review of Intellectual Property and Competition Law 249 (2009), a publication of the Max Planck Institute for Intellectual Property, Competition and Tax Law, based in Munich, Germany.
My article reveals that despite outwardly neutrality, patent laws in fact already cater to some extent for the protection of the environment, through Article 53(a) of the European Patent Convention and corresponding national provisions. That provision in the 1973 regional treaty states as follows:

Exceptions to patentability
European patents shall not be granted in respect of:
(a) inventions the publication or exploitation of which would be contrary to "ordre public" or morality, provided that the exploitation shall not be deemed to be so contrary merely because it is prohibited by law or regulation in some or all of the Contracting States; ....

My research further shows that current justifications do not prevent taking environmental concerns, and more particularly climate change, into account. Some seem even amenable to such concerns. In this light, I submit that patent justifications and laws should be re-thought to include environmental goals.
► 2d, Notwithstanding this conclusion, should patent law be fulfilling this role, in addition to environmental law? If so, what role -- modest or more pronounced -- should patent law play in the prevention of pollution, and the reduction of greenhouse gases in particular? How should this role be implemented in practice? Seeking answers to this set of questions is another article of mine, “Should patent law help cool the planet? An inquiry from the point of view of environmental law,” published in 2 installments, Part 1 in issue 4 of volume 31 European Intellectual Property Review (2009) beginning at page 168, and Part 2 in issue 5 beginning at page 227.
This article shows that whatever the position of positive patent law and its philosophical justifications may be, in the European Union, patent laws must take account of environmental laws, because the European Community Treaty forces them to. Part 1 reviews general environmental principles as they apply to the issue of climate change, as well as specific rules relating to global warming, in order to discover the impact of environmental laws on patent laws. Part 2 analyses how patent law can help reduce greenhouse gas emissions in the atmosphere over and above the standard now set by environmental laws. It reviews the different possible systems that can be put in place and recommends a method to ascertain the eco-friendliness of an invention and who should bear this burden of proof. Concluding that patent laws urgently need to address environmental concerns and, more particularly, the problem of climate change, the article advocates the adoption of a mixed system.
To date my research focuses on European and national patent and environmental laws, with respect to a specific problem, global warming. Many of the conclusions might also apply to environmental protection in general, but more research would need to be carried out to make such general extrapolation.
by Estelle Derclaye at 6:02 AM