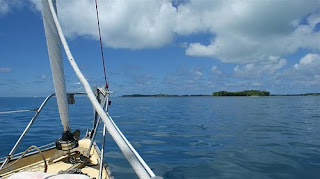 The United States has many well-known offshore territories like Puerto Rico, Guam, and American Samoa. I have just had the pleasure of visiting one of the least known: Palmyra Atoll. One of the 12 most isolated islands in the world, Palmyra (above) is located about 1,052 miles south/southwest of Hawaii. It is only accessible by privately chartered plane (estimated $6,000 per person) or aboard a recreational yacht. I am a stowaway on the latter (to use the term "crew" would be a major stretch of the truth). Thanks to the wonders of satellite technology, this post thus hails from S/V Constellation (above), currently deep at sea.
The history of Palmyra Atoll is fascinating and little known. Originally claimed by Dr. Gerrit Judd of the United States, it was later taken by citizens of Hawaii for the benefit of Kamehameha IV, and was formally annexed to the Hawaiian Kingdom in April of 1862. (In 1897, as posted, Hawaii was annexed to the United States.)
The Atoll was privately owned until 1934, when it was placed under the Department of the Navy. The Navy built an air station there, and brought 5,000 men to the station during World War II. The Atoll is still littered with remnants of its military occupation; for example, entry on entire islands is forbidden due to unexploded ordinance.
After the war, the Fullard-Leo family, the most recent private 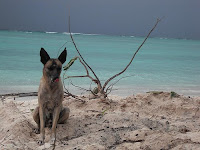 owners of the Atoll, sued the military for return of the Atoll. In United States v. Fullard-Leo (1947), Supreme Court ruled in the family's favor. In 1990, the family leased the island to Peter Savio, who hired Roger Lextrait as caretaker. Lextrait had several animals on the island, one of them a dog named Dadu (left), which he trained to hunt small black-tipped reef sharks for food.
The dog remains on the island, and I personally witnessed him pounce on a shark. He didn't get it ... but then he's getting up in years.
In 2000,The Nature Conservancy purchased the Atoll, retaining one island as a research station for scientists, and the rest is managed by the Fish and Wildlife Service as a wildlife refuge. The total staff and visiting research teams at the time I was there brought the population of the Atoll, as shown at right, to a whopping sixteen people! It's 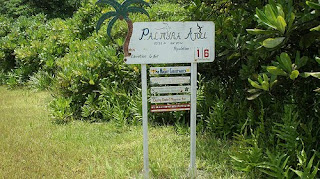 practically a cosmopolitan center in the mid-Pacific. The scientific research being done there varies; from sea turtles to algae to mud, if it relates to the Atoll's ecology it is fair game. The scientists were kind enough to show us their lab work, and Amanda Myers from the Fish and Wildlife Service took us on what was, frankly, the most amazing snorkel trip of my life.
When the good people of Palmyra aren't working, they're playing at the "Palmyra Yacht Club," a structure predating the Nature Conservancy's tenure on the Atoll. The three rooms (one with an ancient weight set, one with a ping pong table and library, and the last with a BYOB bar (below left)) are covered in words of wisdom and signatures, like those below right, from the yachties who have been visiting the islands since the 1980s. It's quite a monument to adventurers the world over. 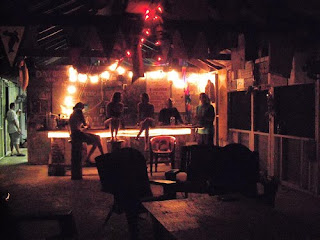 Palmyra made news in the 1970s when it was the site of the double murder of two pleasure cruisers, husband and wife Mac and Muff Graham.
The story is set out in Vincent Bugliosi's torturous 800-page book And the Sea Will Tell. Unless you are looking for a lengthy refresher in evidence law, this book should be skipped, though I understand there is a film version which might prove more palatable.
The two resultant murder trials took place in federal court, apparently pursuant to the Department of the Interior Order 3224, which gave all executive, legislative, and judicial authority ove 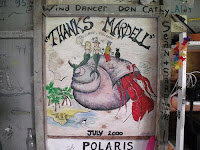 r the Atoll to the Secretary of the Interior.
This authority notwithstanding, Palmyra seems as final as the final frontier can be these days.
My journey continues to Samoa, and I'll post regarding my adventures there when I make landfall.

Why is it named "Palmyra"?

Thanks for the question, Judith. Here's what WikiPedia has to say in answer:

"Palmyra was first sighted in 1798 by an American sea captain, Edmund Fanning of Stonington, Connecticut, while his ship the Betsy was in transit to Asia, but it was only later — on November 7, 1802 — that the first Western people landed on the uninhabited atoll. On that date, Captain Sawle of the United States ship Palmyra was wrecked on the atoll."
So it appears the atoll was named after the wrecked ship.

HI, My name is Jayne Lextrait, i am married to Roger Lextrait...he has written a book, made a video and has many articles about his wonderful experience living on Palmyra for 8 years. He still refers to this time as the best time of his life....

Hi Jayne, sorry I missed your comment! I heard about Roger's stay on the island while I was there. I'd love to read/see his accounts. Are they available online somewhere?