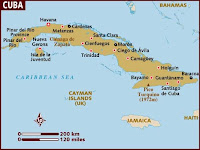 Rum has long been associated with the sword-wielding, one-eyed pirate of days past. No one has done more to transform that image than Don Facundo Bacardi Massó. But the story of Rum is about more than just one man. It is the story of a man, a company, and a country. The story of Rum is the story of the Caribbean.
The patriarch of the Bacardi clan, Don Facundo Bacardi Massó, was only sixteen when he migrated from Spain to work in the family's hardware store in Cuba. The streets of Santiago de Cuba in the 1800s was an intriguing place, and it wasn't long before young Facundo found himself traveling the narrow cobblestone alleys and long, winding roads in search of the heart of Cuban culture.
Rum, of course, was at the very center of that enterprise. But it was a harsh, dark brew with "an unpleasantly musty taste and smell." Aguardiente, as the Cuban Rum of the era was called (literally "burning water"), was shunned by polite society.
Bacardi dreamed of refining Rum and opening up vast new markets for its consumption. He experimen

ted with various distillation methods and began aging the Rum in oak barrels. Soon, he and his wife Amalia purchased a distillery on the outskirts of Santiago to expand production. The story goes that when Amalia first walked into the distillery, she was greeted by a colony of fruit bats intent on making their presence known. Bacardi immediately realized he had found a logo for his new company. Bats were the symbol of good health, fortune, and family unity. It wasn't long before Bacardi Rum found its way into the most exclusive Gentlemen's Clubs and drawing rooms in both the Old and New World. But just as Facundo Bacardi ushered in a revolutionary new era in Rum production, Cuban freedom fighters were brewing their own rebellion.
By 1895, the grumbling discontent Cubans felt for the repressive Spanish colonial regime had developed into all out rebellion. Revolutionaries like Antonio Maceo, Maximo Gomez and Jose Marti fought for independence on the battle front. The Bacardis fought their own clandestine war. Emilio Bacardi, who would take over the company from his father, provided funds to the freedom fighters. Equally as perilous, he would often refuse to pay the taxes levied by representatives of the Spanish Crown.
It was in the Cuban struggle for independence against Spain (1895-1898) that the Bacardi family's revolutionary spirit was born. That spirit lived on long after the Spanish were gone. The Bacardis were again active participants in the seminal battle for the future of Cuba: The Cuban Revolution of 1959. Initially, the family supported Fidel Castro in his efforts to overthrow the despotic rule of U.S.-backed dictator Fulgencio Batista. But it soon became apparent the two sides had deeply divergent interests.
The Bacardi family fled Cuba and dispersed to The Bahamas, Puerto Rico and elsewhere in the Caribbean and the United States. It is said that on the day they left Cuba, the fertile coconut palm tree that graced the entrance of their Cuban distillery withered and died. “As long as the palm tree grows, Bacardi will live on in Cuba,” had been the family's mantra. The death of the palm tree was to have marked the end of Bacardi's ties to Cuba.
Those of us who study international trade recognize the battle between Cuba and Bacardi has never truly ended. The warring parties have simply moved the battlefield into the courtroom and the political arena. For years, Bacardi and the Cuban government have been locked in conflict over who legally has the right to market the name "Havana Club." The original trademark was owned by a Cuban family who sold the rights to Bacardi in 1997. Alas, "Havana Club" is also produced in Cuba by a company that benefited when Fidel Castro nationalized private Cuban businesses back in 1960.
The question of who owns the rights to Havana Club has become an international sensation embroiling Cuba, the United States, Spain, France, Japan, Nicaragua and the European Union. It is a question that has winded its way through the Spanish courts, as well the U.S. federal court system. (For a taste of the U.S. dispute, see Havana Club Holding, S.A. v. Galleon S.A., 203 F.3d 116 (2d Cir. 2000)). The issue has been subject to much political posturing and late night machinations leading to the adoption of The Omnibus Consolidated and Emergency Supplemental Appropriations Act of 1999. The Bacardi-Cuba battle is one without end. Rum serves merely as a proxy in the love/hate relationship of a family, a company, and a country forever intertwined.
My visit to Bacardi's Puerto Rican distillery was the last in a whirlwind seven-day tour of the Caribbean. As I stood in the company's famed courtyard, reminiscent of a Spanish colonial grand home, I could not help but reflect on how much of the Caribbean experience was represented in those walls. Bacardi is firmly planted in Puerto Rico, but like immigrants the world over, it longs to go home. It's Puerto Rican distillery holds many relics from the Old Country -- down to a plastic replica of the famed palm tree. 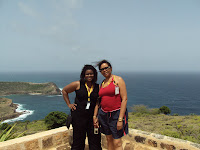 The story of the Caribbean is one of forced migration and of loss, but it is also a story of love. No matter where you come from, or how you find your way to the Caribbean, you cannot help but fall in love with the region and her people. And when you leave, you long to go home again . . . if only for the occasional visit.
Luckily, a good bottle of Rum preserves the memories until the next Caribbean interlude!

by Marjorie Florestal at 7:29 AM