'If certain people are going to rely on shari'a law to flog women on account of what they where, they're going to have to show me the passages in the Qu'ran or the hadiths that so stipulate. I have not found them.'

So spoke, a while back, Lubna Hussein (right), who yesterday was convicted of wearing an "indecent outfit," in violation of a Sudanese national law, for having worn pants and a long blouse, along with her headscarf, at a public restaurant in Khartoum. (credit for Agence France-Presse photo) The court did not impose the allowed sentence of 40 lashes; rather, it fined her 500 Sudanese pounds -- a little more than $200. But Hussein refused to pay. She declared that she "preferred to go to prison," and so she did. Lawyers for the journalist and former U.N. consultant said she planned to appeal.
Hussein's statement bore echoes of those by women's activists from another time and place; an account of the 1905 trial of women's suffragists, accused of spitting on a British police officer, includes this passage: 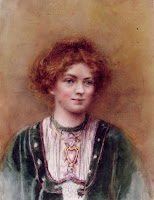 [T]he magistrates returned and announced their decision, which was that for assaulting the police Miss Pankhurst must pay a fine of 10s.6d. and costs, or seven days, and for causing an obstruction in South-street each of the defendants must pay a fine of 5s., or three days.
The Clerk: Have you any goods which may be distrained upon? Both ladies answered in the negative [Christabel Pankhurst was aware of the value of the publicity of the two women being imprisoned, rather than simply paying a fine]. They were taken below. A little later they were taken in a cab to Strangeways Gaol’.

It would be another 2 decades before Pankhurst (above left) (credit) and her colleagues saw the vote extended to all women in Britain.