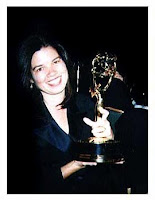 It's IntLawGrrls' great pleasure to welcome Pamela Yates (right) as today's guest blogger.
Pamela's a cofounder of Skylight Pictures, Inc., and the director of Skylight's most recent production: The Reckoning, a feature-length film on the International Criminal Court that's subject of IntLawGrrls posts posted here and here by Lucy Reed and yours truly.
Recipient of a 2008 Guggenheim Fellowship and a member of the Director’s Guild of America and the Writers Guild of America, Pamela has been involved in many film projects in addition to The Reckoning. Examples: producer, Loss of Innocence, winner of an Emmy; director, When the Mountains Tremble, winner of a Sundance award; Executive Producer, Witness to War, winner of an Academy Award; director, State of Fear (2005) (below left), which relied on findings of the Peruvian Truth and Reconciliation Commission to depict the counterterrorism campaign that lasted 2 decades in Peru; director, Presumed Guilty, a PBS special about public defenders in San Francisco; producer, director, and co-author, Cause for Murder, about the lives and deaths of 2 young Mexican lawyers; producer and director, Brotherhood of Hate, about violent white supremacy movements; and producer and director with Skylight colleague Peter Kinoy of Living Broke in Boom Times, a trilogy about poor peoples’ movements in America.

In addition to all these achievements, Pamela directed what is thought to be the first music video made in China. No More Disguises, featuring troubajor Ciu Jian, filmed in Tianamen Square at the dawn of the democracy movement, was named by Rolling Stone as one of the 10 best music videos of 1989 and had its U.S. premiere at the New York Film Festival’s opening night.
In her guest post below, Pamela reports on IJCentral, the online global social network on through which she and her colleagues continue to rally their audience 'round the cause of international justice.
Heartfelt welcome!