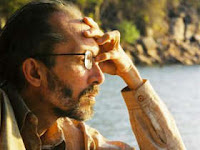 Keith Goddard (left), a human rights defender of tremendous courage and tenacity, died this weekend after a short illness.
The Director of Gays and Lesbians of Zimbabwe (GALZ), Goddard helped transform what had been primarily a social organization with a mostly white and middle-class membership into a political group whose membership both reflected and served the broader LGBTI community in Zimbabwe. (photo credit)
GALZ made international headlines in 1995 when President Robert Mugabe hurled vicious verbal attacks after the group applied to participate in the Zimbabwe International Book Fair. The group was ultimately prohibited from participating in the book fair, whose theme that year was “Justice and Human Rights.”
Ironically, the president's vitriolic statements gave GALZ the coverage it had been denied for over a year when its access to media was banned by the state-controlled newspapers and radio, as the President's remarks were covered extensively. People all across the country learned of GALZ, and, as noted by the organization in its account of the Book Fair Saga, "the membership of GALZ, especially amongst younger black lesbian and gay people, increased dramatically."
The membership of GALZ also grew to include straight allies of the movement, as seen in the remarkable story of prominent lesbian activist and GALZ organizer Tsitsi Tiripano, profiled here by Ms. Magazine in its "Uppity Women" series.

International law "provided the backbone to much of the work of GALZ," Keith Goddard wrote here:

Although their contents have not been translated into local domestic law, these international instruments give GALZ the moral authority to formulate policies on lgbt issues which are in line with modern international thinking.

Although of small stature he had a voice that commanded authority and silence any room he was in. Keith dedicated his life to the advancement of LGBT rights, human rights and his passion for music. The struggle for LGBT rights is a difficult struggle and in many instances in the history of GALZ Keith stood gallantly in the frontline. He dared where most men would not go.

Keith Goddard was arrested multiple times and beaten by police. He endured smear campaigns and harassment. But he persisted, lived to see some changes, and worked hard to secure more. An August 2009 article in the Guardian, headlined "Gay rights campaigners in Zimbabwe see chance to push for equality," describes the push to include a prohibition of discrimination based on sexual orientation in the new Zimbabwe constitution. "I think we've got a 50:50 chance," Goddard is quoted as saying. "We live in hope."
by Stephanie Farrior at 6:10 AM