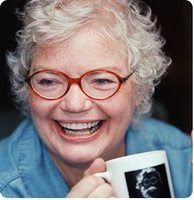 (Thanks to guest blogger Susan A. Bandes for her guest post and this this tribute to our newest foremother)
I would like to dedicate my guest contribution to the newspaper columnist Molly Ivins (right), who, as IntLawGrrls earlier posted, died from breast cancer in January 2007 at the age of 62. Ivins grew up in Houston. She earned a master’s degree at the Columbia University Graduate School of Journalism. Her first newspaper jobs were at The Houston Chronicle and The Minneapolis Tribune, now The Star Tribune. In 1970, she became co-editor of The Texas Observer. In 1976, her writing landed her a job at The New York Times. In The Times' newsroom she wore blue jeans, went barefoot,and brought her expletive-named dog. Ivins' syndicated column, published in about 350 newspapers, derided those whom she thought acted too big for their britches. Her New York Times obituary said:

She was rowdy and profane, but she could filet her opponents with droll precision.

She herself said to People magazine:

'There are two kinds of humor. One kind that makes us chuckle about our foibles and our shared humanity -- like what Garrison Keillor does. The other kind holds people up to public contempt and ridicule -- that's what I do. Satire is traditionally the weapon of the powerless against the powerful. I only aim at the powerful. When satire is aimed at the powerless, it is not only cruel -- it's vulgar.'

Her focus was Texas, a state she labeled “reactionary, cantankerous and hilarious,” run by legislatures who were “reporter heaven.”

Ivins wrote much about one of Texas' most famous political families, the Bushes. She and journalist Lou Dubose wrote two best-selling books: Shrub: The Short but Happy Political Life of George W. Bush (2000) and Bushwhacked: Life in George Bush's America (2003). When she died, her subject issued a statement that said he “respected her convictions, her passionate belief in the power of words, and her ability to turn a phrase.” The then-President added:

'Her quick wit and commitment to her beliefs will be missed.'