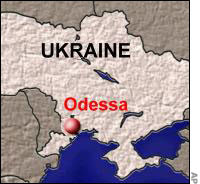 On this day in ...
... 1941, the World War II atrocity known as the Odessa massacre was under way. It had begun the day before and would last another day, and during that time Romanian forces allied with Nazi Germany would kill, by shooting, hanging, or burning, 25,000 to 34,000 Jewish persons from a part of Ukraine including Odessa and neighboring towns. At war's end a number of those responsible would be tried,convicted, and executed; others served terms of imprisonment.