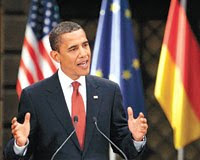 "Peace 2009" is the label that the Norwegian Nobel Committee has given to its on-the-web information on today's announcement, reprinted below in full, that U.S. President Barack Obama is the winner of the Nobel Peace Prize "for his extraordinary efforts to strengthen international diplomacy and cooperation between peoples," with special attention paid "to Obama's vision of and work for a world without nuclear weapons."
The news comes exactly 45 years after the same committee awarded the same prize to another American, the Rev. Martin Luther King, Jr.
Today's news is a most welcome endorsement of the efforts of all in the new administration -- the President, of course, but also many of our colleagues and many others -- who are doing the very hard work of reinforcing the United States' position as a leader in the global community. Obama himself said as much today:

Let me be clear: I do not view it as a recognition of my own accomplishments, but rather as an affirmation of American leadership on behalf of aspirations held by people in all nations.

It is a vision of leadership that seeks to maintain U.S. superpower status, yet accepts the messiness of genuine engagement with our diverse world. Indeed engagement -- even to the extent of risking an occasional loss, as with the failed Olympics bid, or the inevitability of criticism -- is seen in this vision as a sign of strength, a marker that the U.S. role is well earned.
Some are questioning the decision to give this award a scant 9 months after the onset of this Presidency. Such questions ignore just how much Obama and his administration in fact have accomplished in that short time. By way of a few examples, they have:
► Immediately upon taking office, ordered the closure of the detention camp at Guantánamo, and labored since then to make this happen;
► Simultaneously ordered an end to unlawful interrogation practices;
► Reiterated a vision for a nuclear-free world and pressed for nuclear arms reduction through U.S. ratification of the Comprehensive Test Ban Treaty, strengthening of the existing nonproliferation framework, and negotiation of a new U.S.-Russia treaty (prior posts here and here);
► Taken part in the 1st high-level face-to-face talks with Iran in 3 decades (prior post);
► Pledged U.S. contribution to global combat against climate change; and
► Joined the Human Rights Council of the United Nations.
Much, of course, remains to be done. Guantánamo is still open, and the ultimate fate of it and other post-9/11 programs is still unclear. The securing of ratification of the test ban and other treaties -- the Women's Convention and the Convention on the Law of the Sea, to name 2 on which we 'Grrls have posted -- has yet to occur. Policy on the International Criminal Court, subject of the forthcoming 2010 review conference in Uganda, remains to be set. Wars in Iraq and Afghanistan pose a host of problems, as do lower-intensity efforts in countries like Pakistan.
Let's hope the administration continues to work to resolve such issues consistent with the "new climate in international politics" that inspired today's award of the Nobel Peace Prize.

(Cross-posted at The HuffingtonPost)

Obama's stance on the situation in Honduras is anything but peaceful. His unrelenting backing of Honduran ex-president Manuel Zelaya has led to loss of life, property damage, violet protests, and a huge hit to the Honduran and Central American economies.

It boggles my mind that he was given this prestigious award with all of the controversy about that situation and the elections in Iran...