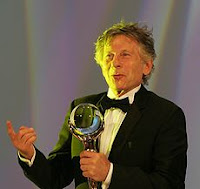 So there I was listening to the morning news in Paris when I heard that Roman Polanski (right), the director of Rosemary's Baby, Chinatown and The Pianist, had been arrested in Switzerland in response to a 30-year-old international warrant issued by the United States seeking to bring Polanski to trial for "having had sex" with a 13-year-old girl. The word "rape" was avoided; the focus was on the Swiss "treachery" of inviting Polanski to a film festival (to award him a prize) and then arresting him.
Then French politicos and "intellos" got into it, and got ugly when openly gay culture minister Fréderic Mitterand (nephew of former President François Mitterand) expressed his support for Polanski (as have many French intellectuals) and was attacked as a pedophile (based on his book La Mauvaise Vie, in which he tells of his encounters with young male Thai prostitutes). Various ministers and sub-ministers put in their 2 cents, then had to retract, and voilà! The "Polanski affair" became the "Mitterand affair." Meanwhile I'm thinking, "what about the girl?" Le Courrier International (a French Utne Reader), read my thoughts and rounded up some great articles from various papers around the world. In short, like several Italian terrorists of the 1970s, after fleeing the US, Polanski found refuge in France, where artistic geniuses may be indulged to the point of impunity. Thus the "Polanski affair" has renewed the Franco-American culture war: the French see the Americans as uptight Puritans overreacting to a man having sex with an adolescent girl, while the Americans see the French as a bunch of lascivious libertines (for a lighter take on the cross-cultural issue see this Doonesbury strip and keep clicking "next"). But as Brendan O'Neill points out in his "culture war" article, the case has also quite unfortunately become a war between victims: then 13-year-old Samantha Gailey, sedated, raped & sodomized by a 44-year-old man; and Polanski, a Holocaust victim--the holiest of victims, untouchable in guilt-ridden Europe because he has already suffered the unspeakable. Never mind that as one who has suffered, you'd think he be reticent to inflict suffering on others.
Missing from the polemic is any idea of justice: Polanski admitted his guilt back in '77, the issue now is how to repair the victim and punish the perpetrator more than 30 years after the crime. Ellen Snortland has a great suggestion: in her open letter to Polanski, she asks him to back her film on violence against girls and women, a sentence that would no doubt do more for society, and perhaps Polanski's rehabilitation, than locking him up. Meanwhile, as the intellectuals line up behind him, the Swiss are digging in their heels and refusing to release Polanski, who is fighting extradition.

You say that you're thinking "what about the girl?" The girl, Samantha Geimer, has adamantly opposed prosecuting Polanski for years. Here's a snippet from The Australian:

Ms Geimer has said in a past interview she was unhappy at having to recount her experiences to police and before a grand jury.

"I was so angry about it. It was like - wasn't what happened bad enough, now we got to go through every single day of my life."

Ms Geimer left Los Angeles for Hawaii in the 1980s where she has rebuilt her life with her husband with whom she has three sons.

However the enduring legal questions surrounding Polanski's flight from justice have ensured that Ms Geimer is regularly dragged reluctantly back into the public eye despite her appeals for the case to be dropped.

"I wasn't prepared to carry a lot of bad feelings with me and further damage my life and continue the trauma of it."

In January, Ms Geimer filed a legal declaration in Los Angeles formally requesting that the outstanding charges against Polanski be withdrawn.

She said Los Angeles prosecutors' insistence that Polanski must return to the United States before dismissal of the case could be considered as a "cruel joke being played on me".

She also voiced anger that authorities had detailed her grand jury testimony in related hearings to the case.

"True as they may be, the continued publication of those details causes harm to me, my beloved husband, my three children and my mother," she said, adding that it was time for closure.

How does that affect your position?

Thanks Kevin. This in no way alters my agreement with the culture-war argument, and I think it makes a strong case for Ms Snortland's suggested alternative sentence, which would not have to involve Ms Geimer in any way. But the fact that Ms Geimer's wishes have been disrespected all these years and do not appear or or not mentioned in many (most?) French, British, German & US articles or news programs relaying the polemic further emphasizes the fact that celebrity (and/or politics) too often clouds issues in a way the justice system(s) is/are poorly equipped to address.

Ms. Geimer's affections have no bearing legally. Polanski's crime is against the state. Not to say that Ms. Geimer is self-absorbed, but the matter is larger than her as it includes all sexual violence victims. Polanski facing the music is the very thing that will release Ms. Geimer from this hell.

I agree with the previous post. Polanski was found guilty of a serious crime and has evaded the legal consequences of his actions. Heller falls headlong into the common trap of prioritizing the wishes of the victim over justice and accountability. We should be wondering why it is primarily in relation to gender-based violence (such as domestic violence, sexual assault and human trafficking) and not other crime-types (such as murder, common assault and robbery) that the victim's wishes and state of mind are so often brought into the discussion of whether or not to prosecute.