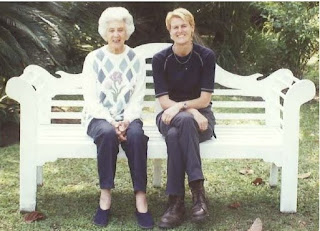 Rosamond Carr, with whom I'm pictured a right, was a wonderful feminist in her own way, a real humanitarian, mother of Rwanda’s orphans, and a good friend to me.
Having started out life in New York as a fashion design hopeful, New Jersey-born Rosamond moved to the Belgian Congo after having married British “big game hunter and filmmaker” Kenneth Carr. He was 24 years her senior -- although she shared with me that she had not known that he was so much older than her when they married. A few years into the marriage, it foundered.
But by then, it seems, Rosamond had fallen in love with Africa, and instead of fleeing back to the States, she bought a farm in Rwanda, growing flowers for hotels, businesses and embassies in Kigali and living modestly. It was at this time that she started raising money to send young Rwandans to school and university, many of them the children of her farm workers. She never married again, nor had any children of her own.
Rosamund's life became intertwined with another amazing woman -- and IntLawGrrls foremother --the zoologist Dian Fossey. Rosamond always spoke fondly and vividly about Fossey if you’d ask her. Identified in the Fossey film biography Gorillas in the Mist (1988) as "Roz Carr," Rosamond is portrayed by actress Julie Harris.
Rosamund refused to leave her home and her staff during the April 1994 genocide in Rwanda. Her farm was in the foothills of the Virunga mountains, close to some of the worst slaughter and fighting in the country. Eventually she was evacuated and many of her staff and friends were killed, but she returned in August the same year to turn her own pyrethrum-drying plant into the Imbabazi Orphanage for children who had lost their parents in the genocide. She was still running the orphanage when I met her in 2000-2001, when we became neighbours in the lakeside village of Gisenyi, on the Congo border. I was there working for the U.N. High Commissioner for Refugees.
Though she turned 90 during that time, Rosamond incredibly active for her age. She was generous to a fault, and her beautiful garden was a real sanctuary from what was still difficult Rwandan politics at that time. We corresponded by old-fashioned letter until she died in 2006, aged 94. Her life is portrayed her memoir, Land of a Thousand Hills: My Life in Rwanda (1999), co-authored with her niece, Ann Howard Halsey.
Rosamond's selflessness inspires me to this day.