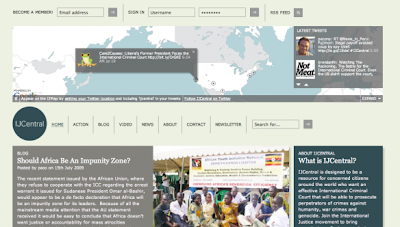 Making the film The Reckoning: The Battle for the International Criminal Court wasn’t enough.
There had to be a way to take the members of a general audience, newly introduced to the idea of the International Criminal Court via the emotional journey in the film, and make them part of a growing movement for international justice.
At Skylight Pictures, where we have been making films about human rights and the quest for justice for 25-plus years, this is always part of our thinking while in production:
► What do we want people to do afterwards?
► How can we make our films engage, educate and increase understanding of human rights amongst the public at large and policy makers, contributing to informed decisions on issues of social change and the public good?
The Reckoning film, on which IntLawGrrls posted here and here, is the flagship in a 3-year 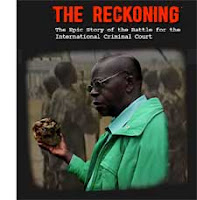 outreach campaign and educational initiative meant to drive new constituents to the international justice movement. (You can join the 10,000 others who've already taken advantage of free online viewing here, and/or purchase the and DVD here.) As a complement, we've created a place that these new audiences can go to after seeing the film: IJCentral, an information resource and social network for global justice. Depicted at the top of this post, the IJCentral site was launched at the world premiere of The Reckoning during the 2009 Sundance Film Festival this past January. Today the site joins IntLawGrrls' "connections..." list in the column at right.
IJCentral implements a multi-platform citizen engagement strategy, using online mapping technology to visualize a global social network for international justice. It aggregates blogs, videos, SMS text messaging, media modules created from The Reckoning footage, Twitter and Facebook, e-mail listserve groups, news feeds, and photo feeds, taking advantage of a range of Web 2.0 social bookmarking applications available online. Making use of mobile phones, the world’s most widely distributed communications platform, Twitter and FrontlineSMS text-messaging technology is incorporated into the map. This allows activists, victims, educators, students and other members of the network to upload SMS text messages to the map -- already, you can see a global conversation about justice appears as geo-located pop-ups on that map.
IJCentral is a work in progress, with constant improvements in access, reach, and innovation. As it accumulates content from users, IJCentral will become an invaluable resource and database for human rights advocates and international justice activists around the world. An array of strategic stakeholder partners with worldwide reach will be accessible through IJCentral, including the Coalition for the International Criminal Court, the umbrella for 2,500 NGOs non-governmental organizations around the world actively working to achieve universal ratification of the ICC, and the American Society of International Law.
Other aspects of our 3-year outreach campaign, all of which will be available free online:
► Multiple language versions of The Reckoning. We now have English, French, Spanish, and Portuguese. Depending on our fundraising efforts, Swahili, Arabic, Luo, and Russian are next.
► In-depth educational modules for classroom use, each 10 to 15 minutes in length. The first 3 modules, produced with Facing History and Ourselves are “The Creation of the ICC,” “Peace and Justice” (as played out in Uganda), and “The ICC and Darfur” (the problem of enforcement).

► Micro-docs, 3-minute shorts that bring the role of the victim into places where victims might not be able to go themselves, such as international justice conferences.