Part 1 of a 2-part series on the Closing Arguments in the Duch case.

After 73 days of trial, the Trial Chamber of the Extraordinary Chambers in the Courts of Cambodia (ECCC) recently heard the Closing Statements in the trial of Kaing Guek Eav (alias Duch), the former head of Tuol Sleng prison (a.k.a. S-21). The statements were a moving, intense, and at times baffling exercise. (A more detailed and fascinating account of the proceedings written by former Ambassador-At-large for War Crimes David Scheffer is available at the Cambodia Tribunal Monitor.)
The public gallery was full 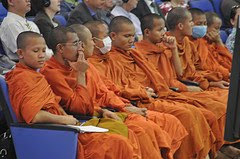 the entire week with members of the public, NGO representatives, VIPs representing various foreign embassies, monks in saffron robes (left) and nuns in white robes, uniformed school children, the head of security of the Special Court for Lebanon with his own security detail, and journalists. Hundreds of people were bused in from all over the country by DC-Cam and other organizations. As an advisor for DC-Cam, I was invited to observe the proceedings and was treated to a vast array of forensic styles and arguments—both legal and extra-legal. I’ll recount some of the more interesting arguments of the Civil Parties and Prosecution today and the amazing presentation of the Defense tomorrow.

Counsel for the 90 Civil Parties were invited to speak first. French counsel Philippe Cannone acknowledged that the Civil Parties had been disorganized at trial, but considered it a mistake to criticize those for whom the trial was convened and warned of efforts to silence the victims and render them, once again, “voiceless icons.” Counsel for the Civil Parties also accentuated the unique perspectives and contributions of the Civil Parties to the proceedings in terms of testifying about the impact of the defendant’s actions on direct and secondary victims, offering a fuller truth about the crimes committed, and providing insights into reparations.
Many of the Civil Parties argued that Duch’s claims of contrition over the course of the proceedings were equivocal and not genuine. They argued that the evidence demonstrated that 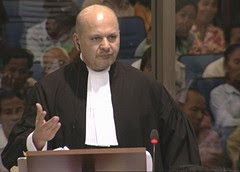 Duch was ideologically loyal to the Khmer Rouge enterprise, sought to ingratiate himself with his superiors, and used his substantial autonomy to increase, rather than alleviate, the suffering of the detainees. Karim Kahn (left), representing 37 Civil Parties, at one point observed that Duch was no Schindler. Potentially undermining the Co-Prosecutors’ theory in Case 002 involving the regime leaders, Khan emphasized the lack of documentation in the record from the Standing Committee concerning the types and severity of torture, implying that Duch took it upon himself to design and implement the horrific torture practices employed at Toul Sleng. In addition, Khan highlighted the larger impact of Duch’s work, arguing that Duch’s unearthing of supposed CIA and KGB spies actually fueled the Khmer Rouge paranoia and led to additional abuses and purges around the country as the Khmer Rouge sought to exterminate real or perceived enemies of the revolution.

Silke Studzinsky of Germany and her Cambodian counterpart, Kong Pisey (below right on the right), presented 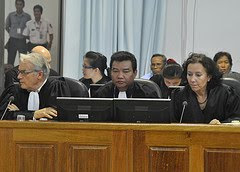 evidence of sexual assault and abuse that occurred in Tuol Sleng. Both counsel implicitly critiqued the Co-Prosecutors for not focusing on sexual violence crimes committed at Toul Sleng. At one point, Studzinsky launched into a bizarre and potentially alienating invective on how the victims felt unwelcome before the ECCC because the judges:

Several of the Cambodian lawyers spent considerable time recounting the basic biographical details of his clients; it is unclear if these were efforts to honor the memory of each of the clients or just examples of poor time management.

Several teams gave arguments on reparations, even though the provisions in the ECCC Statute are ambiguous on this point. One team argued that the ECCC had already provided the victims with most valuable reparations of all: the right to be present, the right to participate, and an opportunity for solidarity. Other suggestions include

Many of the proposed reparations do not involve the accused or his resources, but rather require governmental involvement beyond what the ECCC can order.

The Co-Prosecutors—acting prosecutor William Smith of the U.K. and Chea Leang of 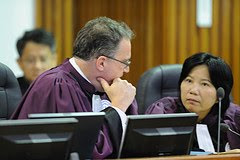 Cambodia (left)—delivered the most traditional closing statement of the proceedings from prepared remarks. Leang emphasized that Duch could be considered both a senior leader, even though he was not a member of the Khmer Rouge Standing Committee and did not have a policy-making role, as well as someone “most responsible” for crimes within the ECCC’s jurisdiction. Leang acknowledged Duch’s claims that he is a scapegoat, facing prosecution when other security chiefs are not, and will not likely be, before the Court. In response, Leang emphasized that S-21 was in many ways at the apex of the Khmer Rouge extermination regime. Duch had unique access to, and influence over, senior leaders. His prison—which, Leang argued, should be considered a death chamber since there was no realistic chance of release—received high value prisoners from all over the country, including purged Khmer Rouge cadre. Leang’s impassioned account in the Khmer language of how prisoners arrived, were processed, were forced to give nonsensical confessions, and ultimately expired at S-21 drew tears from Khmer observers in the courtroom (below right). 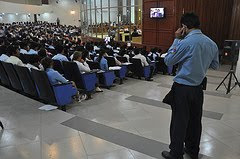 addition to crimes against humanity, Leang explained that the rule of law requires that the Co-Prosecutors apply the terms of the ECCC Statute and international law. In addition, she noted the importance of enforcing the grave breaches regime of the Geneva Conventions to ensure that those provisions are not mere words on paper, of accurately reflecting the criminality of the accused, and of telling a fuller story of the crimes committed at Toul Sleng, particularly against Vietnamese civilians and prisoners of war. (Leang admitted, however, that there was no specific evidence that Vietnamese detainees were tortured; she argued that it could be inferred that they would have received equal—if not worse—treatment than Khmer detainees). Leang argued that the evidence in the record—including media reports, Khmer Rouge internal documents, and the expert testimony of Nayan Chanda (a former editor of the Far Eastern Economic Review and co-author of several books on Asia)—an international armed conflict commenced in Cambodia in April 1975, several months after the Khmer Rouge invaded Cambodia. (We've blogged about this open question here.)

Acting Co-Prosecutor Smith took charge of elucidating Duch’s individual responsibility for the crimes committed at Tuol Sleng, Smith emphasized that Duch manifested all forms of responsibility—as a planner; a giver of orders; an instigator, aider, and abettor; and a direct perpetrator. Smith also argued that the doctrine of joint criminal enterprise (JCE) perfectly captures the essence of the accused’s liability. He noted that other tribunals have found JCE to be a form of commission and that the drafters of the ECCC Statute chose language identical to that of the other ad hoc tribunals in order to import the JCE doctrine as well. As we’ve discussed previously, the Trial Chamber reserved ruling on the applicability of the JCE doctrine until the judgment.

Smith noted that Duch has admitted his “absolute authority” over S-21 and his general responsibility for the crimes committed and that he assented to a list of agreed facts concerning the structure of S-21 and its staff. Smith noted, however, that there were omissions and gaps in Duch’s testimony. Duch also advanced a superior orders defense and did not admit to undertaking his functions willingly, claiming instead to be a “hostage to the regime.” Although Duch tried to portray himself as ignorant of the details of the day-to-day operations in Toul Sleng, or as dependent on orders from his superiors, these claims are not borne out by the evidence. Smith reminded the Court that 155 individuals executed at Toul Sleng were former prison staff members—Duch’s direct subordinates. Smith described Duch and his superiors, one of whom will be on trial next year, as “brothers in arms.”

Turning to the appropriate sentence, Smith emphasized that given the magnitude and gravity of Duch’s crimes, it was inconceivable that Duch (right) would receive less than a lengthy imprisonment. Smith emphasized the impact of the crimes on the victims and their network of traumatized 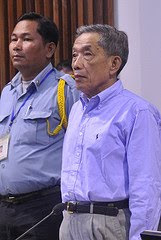 friends and relatives around the globe, the degree of direct participation of the accused, and his zealous participation in the crimes. As additional aggravating factors, Smith highlighted Duch’s abuse of power, the unusual cruelty of his actions, and the defenselessness of the victims. Smith then discounted mitigating factors he anticipated from the accused, such as that Duch was acting under duress or pursuant to superior orders. Smith argued that Duch believed in the validity of any orders he received and implemented them willingly. Although he provided some cooperation after his arrest, Duch lived under an assumed name and remained with his former Khmer Rouge colleagues for years prior to his detention. He only started cooperating when Irish photographer Nic Dunlop discovered his whereabouts in 1999, as recounted in Dunlap’s book, The Lost Executioner. Duch also fought the admission of certain evidence and resisted the introduction of reserve witness lists or even witness statements in lieu of live testimony. These acts, in Smith’s estimation, attested to Duch’s unwillingness to accept full responsibility for his actions or allow the truth to flow freely. Smith emphasized that opposing the introduction of inculpatory evidence is within Duch’s right as a defendant, but is inherently inconsistent with his claims of cooperation and admissions of responsibility.

Turning to concrete issues of sentencing, Smith conceded that Duch should receive credit for time already served in military custody prior to his transfer to the ECCC. Given that Duch was unlawfully detained for a period of time and subjected to other legal irregularities, Smith argued that a sentence of life imprisonment—which would otherwise have been appropriate—should be commuted to a determinate sentence of 45 years. Smith suggested that the Court should carve off another 5 years to reflect Duch’s limited cooperation with the tribunal and conditional expressions of remorse.

(Photos from the Duch Closing Arguments have been uploaded here. All photos are courtesy of the Extraordinary Chambers in the Courts of Cambodia.)
by Beth Van Schaack at 6:01 AM