For world's women, recession goes on 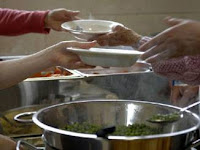 Goldman Sachs may be out of the woods, but the Great Recession is not over for the world’s women.
Will it ever be?
Consider these "Facts & Figures on Women, Poverty & Economics," compiled by UNIFEM, the U.N. Development Fund for Women:

The chasm between the rich and the poor has become unfathomable.
As a recent U.N. study explains, global wealth is distributed "as if one person in a group of ten takes 99% of the total pie and the others share the remaining 1%." Few argue that this is inevitable or unimportant, but there is little consensus on how to proceed.
What should be done?
Who should do it?
These questions should not be left entirely to politicians, economists, and celebrities.
In a recent article, "Theories of Poverty/The Poverty of Theory," 2009 Brigham Young Law Review 381, I consider the usefulness (or not) of legal theory. The article explains how liberal theories in particular dominate post-Cold War approaches to poverty, as shown in three major legal instruments. It then introduces other theories of poverty, those of liberalism’s 'discontents,' conspicuously absent from post-Cold War discourse. The article concludes by focusing on the limits of theory itself in a liberal international system that has neither the legal muscle to effectively address global poverty nor the political will to develop it.
A second article, "Jam Tomorrow: The Limits of International Economic Law," forthcoming in the Boston College Third World Journal, asks whether existing international economic law -- including the law governing and generated by the International

Monetary Fund, the World Trade Organization, and the World Bank -- has the capacity to realize distributive justice. The question takes on special relevance with the election of an American President explicitly committed to reducing economic inequality (at least domestically).
"Distributive justice" is an ambiguous goal. If we simply mean "more fair than what we have now," "distributive justice" is within easy reach, since we could hardly do worse. As a threshold question, accordingly, it should be established what, exactly, is required for actual "distributive justice." I take as a starting point the relatively modest objective of the Millennium Development Goals — to halve the number living in extreme poverty, i.e., subsisting on less than $1 a day, by 2015. As economist Jeffrey Sachs points out, the wealth is still there. It is just a matter of moving it around.
"Jam Tomorrow" argues that this is not going to happen, because:
► 1st, this is not an objective of international economic law; and
► 2d, even if the political will were there, it would not happen because "international economic law" is not a coherent legal subject with the capacity to make it happen. Neoliberalism cannot be relied upon to produce distributive justice, but neoliberalism is not the only game in town.
Constructive alternatives?
Microfinance is fine, but markets are no silver bullet. For further thought, see, for example:
► Human Rights And The Global Marketplace: Economic, Social And Cultural Dimensions, by Jeanne M. Woods, Loyola University New Orleans College of Law, and IntLawGrrl Hope Lewis, Northeastern University School of Law;
► Dr. Martha Nussbaum, University of Chicago Law School, on the capabilities approach, in her 2001 book Women and Human Development; and 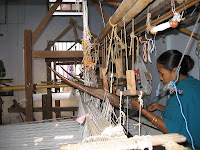 ► The brilliant essay on "Exploitation" by Dr. Susan Marks, King's College London, in the 2008 collection that she edited, entitled International Law on the Left.
(credit for photo of food charity in Australia; credit for woman at handloom in India)
by Barbara Stark at 6:03 AM