It's IntLawGrrls' great pleasure to welcome Dr. Staci Strobl (left) as today's guest blogger.
Staci's an Assistant Professor in the Department of Law, Police Science and Criminal Justice Administration at John Jay College of Criminal Justice, City University of New York. She completed her Ph.D. in Criminal Justice, with a specialization in Comparative Criminal Justice and Criminology, at CUNY’s Graduate Center; received her M.A. in Criminal Justice at John Jay; and earned her B.A. in Near Eastern Studies at Cornell University. Before joining John Jay as a faculty member, Staci was editor of the CUNY Dispute Resolution Consortium’s Compendium of Working Papers. She also has been a U.S. Probation Officer and a crime journalist. Among her areas of expertise, as is evident in her list of publications: "comic book portrayals of crime in the United States."
Recently, Staci was the recipient of a Fulbright grant to Bahrain, where she completed an ethnographic study of policewomen. Her guest post below discusses an article of hers that's an outgrowth of that research -- a study of the country's criminalization of domestic workers.
Staci dedicates her post to Mary Wollstonecraft (1759-1797), who, as IntLawGrrls has posted, was "a feminist, author, and intellectual inspired by the ideals of the French revolutionary era," and the author of A Vindication of the 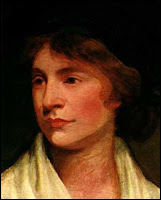 Her work was an important part of my development as a feminist when I first read her work in high school. Though she is probably not the most glamorous of foremothers since she is required reading (!), I think her work is a good reminder of how everything had to/has to be fought for, including that women be considered as fundamentally rational creatures like all other humans.

Today Wollstonecraft joins other foremothers in IntLawGrrls' list just below the "visiting from..." map at right.
Heartfelt welcome!