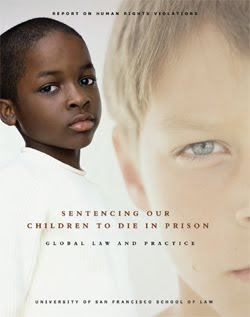 This morning the U.S. Supreme Court's set to hear argument on the constitutionality of sentencing children to life without parole for crimes not resulting in the death of a human being.
Under review are 2 cases:
► Graham v. Florida, No. 08-7412, involving a 17 year old sentenced to life imprisonment without possibility of parole after his conviction for violating a probationary sentence, imposed a year earlier, for felony robbery.
► Sullivan v. Florida, No. 08-7621, involving a 13 year old who received the sentence following conviction for sexual battery.
Lyle Denniston's superb preview at SCOTUSblog notes the differences between the ages and prior criminal behavior of the 2 petitioners, andwonders "which of those differences may have persuaded the Court to grant both cases," rather than grant 1 and hold the other, as is its typical practice.
Critical will be how this Court views the 2005 precedent in Roper v. Simmons, in which a 5-Justice majority held that execution of juveniles violates the ban on cruel and unusual punishments in the 8th Amendment to the U.S. Constitution. Subsequent changes in the composition of the high bench likely will not have disturbed the 5-4 split on that precise precedent; the question, rather, is whether Justices will consider Simmons to have augured a similar result in these cases.
Will the findings in Simmons respecting the unformed personality of children militate in favor of a less-harsh sentence in these cases, as it did there? Will it matter that the offenses at issue here were not homicides? Conversely, will Justices focus less on the nature of the child and more on the nature of the sentences, concluding that Simmons does not control for the reason that "death is different"?
And what of the rest of the world? Will Justices go "looking beyond their borders," to quote Justice Ruth Bader Ginsburg, for guidance in interpreting the Constitution?
They sure did in Simmons, and so drew much criticism, as I've written here. Not much overt consultation of foreign and international law since then. Among those favoring a return to that methodology in these cases are Amnesty International, the Amsterdam Bar Association, the Bar Council of Hong Kong, the Bar Human Rights Committee of England and Wales, the Bar of Montreal, the Center for Constitutional Rights, the Columbia Law School Human Rights Clinic, Human Rights Advocates, the Law Council of Australia, the Law Society of England and Wales, the Law Society of Ireland, the Netherlands Bar Association, the New Zealand Law Society, The Advocates for Human Rights, and Union Internationale Des Avocats. Here's what their Brief for Amnesty International, et al., As Amici Curiae in Support of Petitioners, which cites many treaties and national laws, has to say:

Amici urge the Court to consider international law and opinion when applying the Eighth Amendment's clause prohibiting cruel and unusual punishments. International standards for sentencing juvenile offenders to life in prison without the possibility of parole bears directly on domestic

compliance with international legal and societal norms. Those standards also provide an important indicator of evolving standards of decency, which in turn illuminate the contours of acceptable conduct under the Eighth Amendment. The United States is the only country in the world that does not comply with the norm against imposing life without parole sentences on juveniles under the age of 18. Prohibiting the sentence challenged in these cases would bring the United States into compliance with one of the most widely accepted human rights norms and with its international treaty obligations, and it would honor the Eighth Amendment principles that led this Court to strike down the juvenile death penalty in Roper v. Simmons, 543 U.S. 551 (2005).

Principal authors of the brief in addition to San Francisco lawyer Neil A.F. Popovic are the authors of authors of the 2008 report depicted above left: IntLawGrrls Connie de la Vega and Michelle Leighton.
by Diane Marie Amann at 12:02 AM

Our Opinio Juris colleague Roger Alford subsequently recapped the arguments, with links to the transcripts, at http://opiniojuris.org/2009/11/09/constitutional-comparativism-and-juvenile-life-without-parole/. Apparently not a peep about "beyond-borders" consultation.