Lawyer regulation in Europe & at home

First of all, let me extend my thanks to IntLawGrrls for encouraging me to appear as a guest blogger. Although I have extensive materials posted on the Internet, I usually am very shy about blogging. As a result, I was very appreciative of the encouragement that IntLawGrrl Diane Marie Amann gave me to serve as a guest blogger, especially since my international law “niche” is not very well known.
I think there are a couple of reasons why my “niche” is not well-known:
► First, relatively few scholars work in this field.
► Second, for many years, the topics I have written about weren’t addressed at American Society of International Law or International Law Association meetings.
► Third, this field doesn’t’ fit neatly into the boxes of public international law or private international law. Indeed, early on, it wasn’t always clear that what I did was “law.”
I am deeply committed to transparency, and many of my early articles memorialized and analyzed bar association initiatives related to lawyer regulation. As time has marched on, many of these initiatives have become “law” and have provided the foundation for international or transnational legal developments. Because these initiatives often were developed by volunteer lawyers who had day jobs, I considered it a great success to get the developments out of their file cabinets (later, their computers) and into the public domain, where the initiatives could be shared, analyzed, and debated.
I still consider myself a transparency crusader. But much of what I now do is sift through voluminous Internet websites in order to synthesize, publicize, and spur public debate about important developments in the regulation of global lawyers.
An example of this scholarship is my article entitled "The European Commission Project Regarding Competition in Professional Services," published this year in the Northwestern Journal of International Law & Business.
Many international lawyers have now heard about the Clementi Report, which provided the impetus for the reforms in Britain's Legal Services Act 2007, which has dramatically changed the regulation of the legal profession in England and Wales and has set the stage to allow allow publicly traded law firms in the United Kingdom. (They already exist in Australia.)
Most lawyers are not aware, however, that a similar initiative exists in the European Union, and that it too has led to wide-ranging reform proposals.
In 2002, Wouters (Case C-309/99) and Arduino (Case C-35/99), both involving competition law (in the United States, antitrust law) and the legal profession, were pending before the European Court of Justice. At this time the European Commission issued an “invitation to tender” a study of the liberal professions; the resulting contract was awarded to the Institut für Höhere Studien/Institute for Advanced Studies in Vienna, known by the acronym IHS. In March 2003, the European Commission: announced the results of the IHS Study; launched a professional services competition initiative that would focus on several professions, including the legal profession; and began a Stocktaking Exercise. The IHS Study included the figure below, which was very influential: 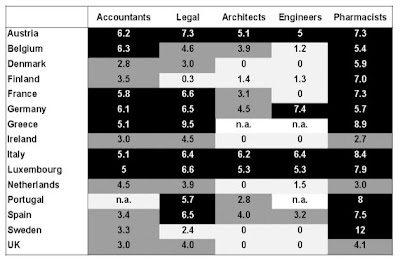 (In this table, the darker the color and the higher the number, the more regulation a country has.) The Study concluded that countries with lower levels of regulation did not have higher levels of consumer complaints, and questioned whether higher levels of regulation were necessary.
In 2004, the Commission issued its Report on Competition in Professional Services. For the legal services sector, this Report, like the IHS Study, examined 5 issues:
► lawyer qualification, or entry, rules;
► lawyer monopoly rules;
► alternative business structure prohibitions, such as prohibitions on publicly traded law firms and multidisciplinary partnerships;
► fee rules; and
► advertising rules.
The Commission’s 2004 Report relied heavily on the IHS study. Among other things, the former asked whether

the lower regulation strategies which work in one Member State might be made to work in another, without decreasing the quality of professional services, and for the ultimate benefit of the consumer.

In 2005, the Commission issued a followup report, Professional Services -- Scope for more reform, which stated that the Commission was “fully committed to bringing about wide scale reform to this sector.” Paragraph 25 of the Report contained some damning language about the current lawyer regulatory system:

The weight of tradition should not be underestimated as affecting the pace of change, and in many countries regulators fail to see how things can be done differently. Moreover, the professions themselves have in general not been actively promoting it. The current picture could also indicate that some countries have relatively weak regulatory oversight of the professions. This could be caused by the economic phenomenon of regulatory capture which is not uncommon especially in areas subject to self-regulation.

The 2005 followup report used an updated version of a chart that had appeared in the IHS study to bolster its conclusion about the need for regulatory reforms: 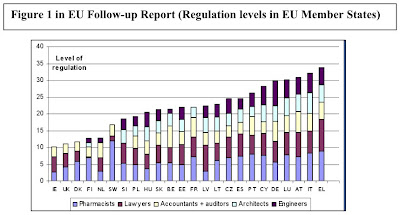 Although the Commission seems subsequently to have changed some of its competition enforcement priorities, these reports remain influential for several reasons:
►First, many European Union member states are now engaged in reviewing (and sometimes dramatically changing) their lawyer regulatory rules.
►Second, these reports (or the underlying IHS study) have been relied upon in several subsequent global initiatives, including the 2008 Report on Competitive Restrictions in Legal Professions of the Organisation for Economic Co-Operation and Development, as well as the OECD's Indicators of Regulatory Conditions in the Professional Services.
►Third, the American Bar Association's creation of a Commission on Ethics 20/20, coupled with the likely adoption of rules that will allow publicly traded law firms in Britain, the issues addressed in these reports remain very topical.

In my view, because of the crucial roles lawyers play in developing international law and in preserving the rule of law, these developments are important for all international lawyers and scholars, regardless of their areas of specialization. This EU initiative addresses infrastructure issues that determine how lawyers are able to go about doing their jobs.
My article discusses the IHS Study, the Commission reports, stakeholder responses, related developments, and possible implications. It is a lengthy article because, as noted earlier, it was intended to synthesize, publicize, and spur public debate about this very important global lawyer regulatory development. My shorter, more reflective article on the significance of the EU Professional Services Initiative, along with a number of other developments, is here; my Powerpoint slide version may be found here.
Thanks again for inviting me to serve as a guest blogger. I hope this post has provided something a bit different, but interesting.