The Next Best Thing Turns Out Not So Great 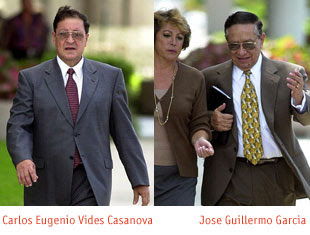 We've blogged before about the United States' use of immigration law to seek either criminal or administrative remedies against human rights abusers present in this country. The case against one such defendant was recently dismissed. General Jose Guillermo Garcia of El Salvador (right, on the right) was indicted for:
► using a passport procured by false statement, in violation of 18 U.S.C. § 1546(a), and
► making a materially false statement to a federal officer, in violation of 18 U.S.C. § 1001(a)(2).
The district court issued an order of dismissal (without prejudice) when the key witness against Garcia (his former immigration lawyer) changed her story on the eve of trial. The Department of Justice has so far resisted criminally prosecuting Garcia for any human rights crime on the ground that the legislation implementing the Torture Convention was enacted after the events in question.
This is the second legal bullet Garcia has dodged, although a $50 million judgment remains outstanding against him in an Alien Tort Statute case brought on behalf of three Salvadoran refugees.