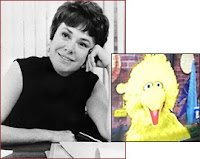 On this day in ...
... 1969 (40 years ago today), a puppet show set in a New York City neighborhood, brainchild of documentary producer Joan Ganz Cooney (near right), made its TV début. Sesame Street is still running strong: it's "the most widely viewed children's program in the world" and "has aired in more than 120 countries." Though "some critics have blamed the show and its use of brief segments for shrinking children's attention spans," the enduring popularity of the likes of Big Bird (above, far right) is evident in the eagerness of humans to visit them. A current example: the healthy-related segment below featuring Michelle Obama and Elmo.