... 1960, entertainers Sammy Davis Jr. and May Britt got married (below right). The New York Times' announcement said nothing about the diverse ancestries of the couple; elsewhere, however, that fact drew much attention. As explained at this website: 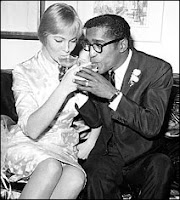 Although interracial marriages had existed for centuries, the long-segregated American populace was largely reluctant to acknowledge, much less celebrate, marriage between people of different races. In fact, the wedding of this African-American man to a white woman from Sweden was still technically illegal in 31 of the United States. The wedding sparked death threats and demonstrations. Davis, who had broken numerous color barriers as a performer, unwittingly broke another when he very publicly married the woman he loved, despite the difference in the color of their skin.

Notwithstanding that the country is now governed by a President born the following year to another interracial couple, and that the Supreme Court held antimiscegenation laws unconstitutional in 1968 (and here), an incident this autumn reminds that in some pockets of America, issues persist.