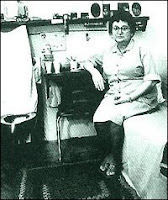 On this day in ...
... 1984 (25 years ago today), North Carolina executed Margie Velma Barfield (right), who'd been convicted 7 years earlier of fatally poisoning her fiancé's beer. (photo credit) (Although she'd confessed to killing her mother and 2 others by the same method, she was not tried for those deaths.) Barfield, 52, was the 1st woman "to be put to death in the United States in 22 years," and the 1st ever killed by lethal injection. In the United States, 9 women have been executed since that time by the same method, in addition to 1 woman by electrocution, according to the Death Penalty Information Center. More than 4 dozen women are on death row. As for the execution of Barfield, The New York Times' coverage included a bitter anti-capital-punishment editorial, which began:

Margie Velma Barfield, who died by lethal injection early yesterday morning, chose pink cotton pajamas for the event. Her last meal consisted of Cheez Doodles and a Coke. We know these details about Mrs. Barfield's wardrobe and diet, as we know them about the 28 men who've shared her fate in the eight years since the death penalty was restored, because the entertainment value of an execution is still very high.

(Prior November 2 posts are here and here.)
by Diane Marie Amann at 5:59 AM