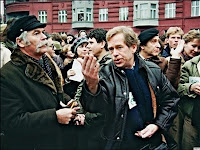 On this day in ...
... 1989 (20 years ago today), the leadership of Czechoslovakia -- 2 dozen members of the Communist Party who'd "called in the Soviet tanks in 1968 to crush the 'Prague Spring' reformers," "resigned to make way for democratic changes," the BBC reported. The move came after the party's leader acknowledged "underestimating the force of the pro-democracy movement." A month later a Czech dissident writer, Václav Havel -- shown at center in this 1988 photo (credit) -- became the country's President.