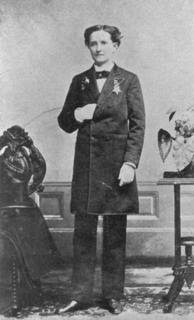 On this day in ...
... 1832, Dr. Mary Edwards Walker (right) was born in Oswego, New York. Twenty-two years later she graduated from Syracuse Medical College, then married a fellow medical student, though she kept her own name. The couple's attempt to set up a joint practice failed because patients would not accept a woman as their physician. When the Civil War broke out, Walker, a slavery abolitionist, volunteered as a nurse, the only position open to her. Eventually she became the 1st woman physician contrator, and treated the wonded at battles such as Bull Run, Chickamaugua, and Atlanta. Captured by Confederate troops, she was a prisoner of war for the better part of a year. Walker was a feminist and an advocate for change in "women's dress":

During the war, she wore trousers under her skirt, a man's uniform jacket and two pistols. As an early women's rights advocate, particularly for dress reform, she was arrested many times after the war for wearing men's clothes, including wing collar, bow tie and top hat.

Walker, the only woman ever to have received the Medal of Honor, the United States' highest military award, died in 1919.