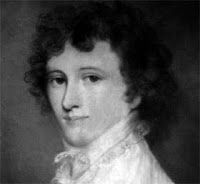 On this day in ...
... 1797, a Federalist by the name of John Marshall wrote a letter home to his Virginia-based wife Mary, known as Polly Marshall (right), in which he described the circumstances of his diplomatic mission to Paris:

I lived till within a few days in a house where I kept my own apartments perfectly in the style of a miserable old bachelor without any mixture of female society. I now have rooms in the house of a very accomplished, a very sensible, and I believe a very amiable lady whose temper, very contrary to the general character of her country women, is domestic and who generally sits with us two or three hours in the afternoon.

The woman who'd so bedazzled Marshall, then 42, was Reine-Philiberte de Villette (left), a 30-year-old widow with 2 children. As a girl she "had been destined for a convent" because of her family's impoverishment; instead, she'd been adopted and brought up by the aged French philosopher Voltaire. As detailed in this French account of her life, following the death of the Marquis de Villette, whom she'd married by arrangement of Voltaire, Madame de Villette became a society woman. Her salon afforded an entrée into French circles for diplomats from the new American republic -- among them Marshall, who 4 years after writing this letter would become Chief Justice of the United States.
(Prior November 27 posts are here and here.)
by Diane Marie Amann at 5:59 AM