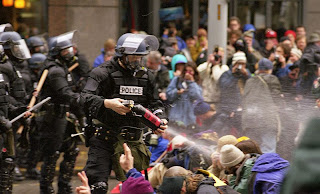 On this day in ...
... 1999 (10 years ago today), what had been scattered anti-globalization demonstrations the day before, of a ministerial meeting of the World Trade Organization in Seattle, turned into street protests that, according to a website set up by the University of Washington libraries, "forced the delay of the WTO opening ceremonies." Soon joining in were "youthful, out-of-control, self-proclaimed 'anarchists'"; by midday local police "ran low on tear gas, bus service was suspended downtown, and many businesses closed their doors." (credit for photo of police directing pepper spray at protesters on this day) A state of emergency and curfew were declared; "forced retreat" occurred amid vandalization of local businesses. Collapsed WTO talks would be resumed in 2001 at Doha, Qatar.