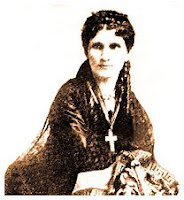 On this day in ...
... 1834 (175 years ago today), a daughter, Anna Harriette, was born into a family of high military rank, the Crawfords, in Wales. Or so she claimed years later in the memoir published under the name she took after marriage -- Anna Leonowens -- and titled The English Governess at the Siamese Court (1870). Recent research, however, indicates that Leonowens (right) was born 3 years earlier, in India, to a father who was a lowly sergeant, surnamed not Crawford but Edwards, and to an Anglo-Indian mother. (photo credit) By her deception, it is written, Leonowens

protected not only herself but her children, who would have greater opportunities if their mixed-race heritage remained unknown.

Some facts are not in question: that she married in India in 1849, that in her 30s she was widowed, and that as a result she accepted an offer to become the governess for the "39 wives concubines and 82 children" of Mongkut, King of Siam, in present-day Thailand. Her adventure is perhaps best known through film adaptations such as the 1956 musical The King and I.

(Prior November 5 posts are here and here.)
by Diane Marie Amann at 5:59 AM