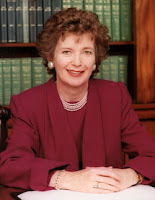 On this day in ...
... 1990, Ireland voted into office the country's 1st woman President. Chosen in a runoff contest was Mary Robinson (left), who'd run as an Independent. Nominated by the Labour Party and the Workers' Party of Ireland, as well as by independent senators, she was "the first elected president in the office's history not to have had the support of Fianna Fáil," a party long dominant in Irish politics. Of her election, the BBC wrote:

Mrs Robinson, a Dublin barrister, is considered radical by Irish terms.
A civil and human rights lawyer, she has campaigned for the liberalisation of laws prohibiting divorce and abortion for more than 20 years.
However, she not only won the support of women countrywide but also polled well in traditionally conservative rural areas.
The mother-of-three has been a member of the Irish Senate for more than 20 years.

In her subsequent post as U.N. High Commissioner for Human Rights (1997-2002) Robinson would not be free of controversy, either. Most recently, an online campaign has sought to draft her to become the 1st President of the European Council. She's said she doesn't want the job, but her name surfaced again in a recent Time magazine article.