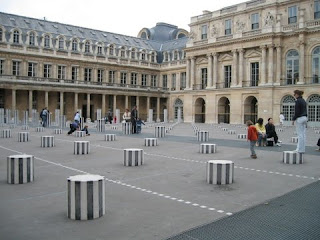 Post-hoc constitutional review is finally coming to France.
As many comparatists know, constitutional review of laws has hitherto been limited to abstract review before laws are adopted, and it has only been about 20 years since the right to request such review was enlarged such that a group of 60 or more senators or deputies (members of the national assembly) may make such a request. Well, yesterday Parliament approved one of aspect of the constitutional revisions proposed by the Sarkozy government in July 2008: the right of citizens to petition the Conseil constitutionnel or Constitutional Council (above right) -- albeit indirectly -- for post-hoc review of a law they feel violates their constitutional rights.
Except in felony trials before the cour d'assises, citizens in the course of first-instance or appellate proceedings may claim a law already implemented violates her constitutional rights. If to he lower-court judget deems the complaint founded, she forwards the request for review either the Cour de cassation, the supreme court for civil actions, or the of civil jurisdiction, or to the Conseil d'État, the supreme administrative court. That court then decides whether or not to forward the complaint to the Conseil constitutionnel (Game of telephone, anyone?)
The government's original proposal included a time limit for all this forwarding, after which the citizen could petition the Conseil constitutionnel directly if the relevant supreme court hadn't responded. But fears of overloading the Conseil constitutionnel led to adopting the law without any such limit.
Defended by some as not being an "Americanization" of French law (major fear here in France) because other European states allow post-hoc review and because there will be both pre- and post-hoc review, the new law may be implemented as early as next spring. There's no telling, however, when it might actually lead to a Conseil constitutionnel ruling on a post-hoc challenge.
by Naomi Norberg at 5:00 PM