Reflecting on the Supreme Court's consideration of juvenile life without parole ... 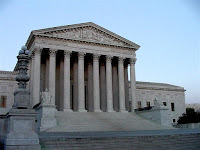 Since the U.S, Supreme Court heard oral argument last week in Graham v. Florida and Sullivan v. Florida, commentators have speculated on how the Justices will rule in the two controversial cases (here and here and here).
As posted last week, both cases involve juveniles who received a sentence of life without the possibility of parole in Florida for nonhomicide crimes. At issue is whether the Constitution permits this sentence for a crime committed by someone who was under the age of 18 years. (Consideration comes amid a development discussed in the post below: doubts respecting the death penalty.)
Following an amicus brief that IntLawGrrl Connie de la Vega and I submitted in the cases on behalf of Amnesty International and other groups, including the Bar of England and , I was fortunate to be able to watch the oral argument last Monday.
After two hours of what was vigorous, if not sometimes caustic, questioning by the Justices of the attorneys in both cases, it was surprising that no questions were raised about global law and practice, a prominent feature of the opinion written by Justice Anthony M. Kennedy in Roper v. Simmons (2005). Yet, as was the case in Roper, the United States is isolated among other nations of the world as the only country that imposes this sentence on a juvenile, for any crime.
Below are a few excerpts of remarks not widely reported that may be telling about the issues of interest to the Justices.. The articles reported above captured the gist of the joint reasoning that Chief Justice John G. Roberts Jr. and Justice Samuel A. Alito Jr. pursued, in what appeared to be an attempt to win over Justice Kennedy and others to adopt a proportionality approach in the sentencing of juveniles. Roberts and Alito agreed both that kids are different from adults and that age would be relevant, but they sought to attain agreement that some juveniles deserve to receive the life without parole sentence and thus sentencing could be determined "proportionate" on a case by case basis. In relation to the questioning of Graham’s attorney and later the attorney for the state of , the following interchanges were interesting:

JUSTICE ALITO [right]: And you are making a per se argument, no? You can imagine someone who is a month short of his 18th birthday, and you are saying that, no matter what this person does, commits the most horrible series of non-homicide offenses that you can imagine, a whole series of brutal rapes, assaults that renders the victim paraplegic but not dead, no matter what, the person is sentenced shows no remorse whatsoever, the worst case you can possibly imagine, cannot -- that person must at some point be made eligible for parole. That's your argument?
MR. GOWDY [Graham's attorney]: Your Honor, that's -- that's correct. A life -- yes. A life with parole sentence would be constitutional, and that may mean that person you describe still spends his entire life in prison, but life with parole gives some hope to the adolescent who has an inherent capacity to change. It gives him some hope that later in time he may be released. 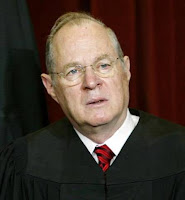 JUSTICE KENNEDY [right]: What -- what would you do if there were a crime spree and there were different jurisdictions?
One jurisdiction imposes for 35 years, the next jurisdiction for another 35 years, to be served consecutively.
MR. GOWDY: Well, Your -- Your Honor, I -- I think the -- that you would get into the question about whether that sentence is the equivalent of life without parole, and there could be an argument made that if you -- obviously, if you sentence someone to 150, 200 years, there is no conceivable hope of ever
release, 150 years without parole.

Here's more, during questioning of the attorney for the State of :

JUSTICE KENNEDY: If we look just at deterrence, my initial instinct is that the difference in life and life without -- life with parole and life without parole is just not a factor in deterrence. I -- I don't know how I'd confirm that one way or the other, but let's -- let's assume that there is some basis for that intuition. Then, insofar as the deterrence prong is concerned, since it's not a deterrent, and if you assume that there is rehabilitation, what is the State's interest in keeping the accused that -- the -- the defendant in custody for the rest of his life if he has been rehabilitated and is no longer a real danger? What's the State's interest?


And then, during rebuttal by Graham's attorney:

JUSTICE KENNEDY: Why does a juvenile have a constitutional right to hope, but an adult does not?
MR. GOWDY: Because the juvenile is different than an adult. A juvenile is less culpable. He's -- we know over time he will change and -- and potentially reform, as opposed to an adult.

Oral argument transcripts in these juvenile LWOP cases can be found here.

by Michelle Leighton at 5:47 AM

Thanks Michelle. With respect to the question, "what if this horrible criminal was just a month shy of turning 18" (but sir, the age of "adulthood" used to be 21), I am reminded of an article I read recently in The Guardian on the sports federation trying to decide how much of certain hormones makes a person a man or a woman and would require "women" to compete as "men." The scientists have no consensus answer, and as one woman official put it: it's not a line drawn by nature, it's a line we draw on nature. I hope this court is up to drawing that line.

Naomi, great observation! Yes, I agree, the question is whether they're up to drawing the "bright line" at 18. The argument for the "case by case" determination of whether a juvenile deserves LWOP was refuted by evidence that experts suggest kids don't fully form into adults until well into their 20s.

So I'm not the late bloomer I always thought I was?! "Late 20s" jibes with the impression shared by me and many of my friends that we really felt fully formed and knew who we were at 28.