(Occasional sobering thoughts.) In last night's speech at the U.S. Military Academy at West Point, New York, President Barack Obama (below left) confirmed that he is deploying an additional 30,000 U.S. troops to Afghanistan, to bring the total complement of U.S. service women and men there to 100,000. (photo credit) (Transcript and video of the President's speech available here.) Though he said he would begin drawing down that force in 18 months, he set no timetable for full U.S. withdrawal from the region -- a deliberate word choice, given Obama's clear statement 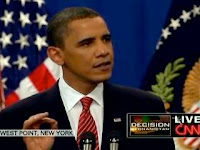 that the conflict extends to Pakistan as well as to Afghanistan.
Other new deployments to Afghanistan are likely soon to be announced in other countries, given the following immediate-reaction statement from Anders Fogh Rasmussen, former Prime Minister of Denmark and current Secretary-General of the North Atlantic Treaty Organization:

This is not a U.S. mission alone. There are 43 countries on the ground under NATO command and I am confident that other allies and partners will also make a substantial increase in their contributions.

It thus seems time to readjust IntLawGrrls' longstanding "...and counting..." feature.
Afghanistan now will receive primary focus, a shift illustrated in today's introduction of the photo of an Afghan funeral above right (credit), which replaces the Iraqi photo we long have used. And though counts on Pakistan are not readily available, news from that theater of combat will be included as appropriate. In the absence of any Afghanistan-related site like Iraq Body Count, available civilian casualty figures from UNAMA, the U.N. Assistance Mission in Afghanistan, will be provided.
And so, here's the casualty count since our post 5 weeks ago:
► According to ¶ 54 of the September 22, 2009, Report of U.N. Secretary-General Ban Ki-moon to the Security Council, entitled "The situation in Afghanistan and its implications for international peace and security," UNAMA

recorded 1,500 civilian casualties between January and August, with August being the deadliest month since the beginning of 2009. These figures reflect an increasing trend in insecurity over recent months and in elections-related

violence. Almost three times as many civilian deaths (68 per cent) were attributed to anti-Government elements activities than to pro-Government forces (23 per cent). As detailed in the UNAMA mid-year bulletin on the protection of civilians in armed conflict, the most deadly tactics used and which accounted for the largest number of
civilian casualties in the conflict to date were attributable to planted improvised explosive devices, and suicide attacks carried out by anti-Government elements accounted for 39.5 per cent of fatalities. Air strikes by pro-Government forces accounted for 20 per cent of fatalities.

Meanwhile, the U.S. Department of Defense reports that coalition military casualties in Afghanistan stand at 929 Americans, 236 Britons, and 367 other coalition servicemembers. That's an increase of 43, 14, and 6 casualties, respectively, in the last 5 weeks. The total coalition casualty count in the Afghanistan conflict is 1,532 service women and men.
► Respecting the conflict in Iraq, Iraq Body Count reports that between 94,332 and 102,932 Iraqi women, children, and men have died in the conflict in Iraq since the U.S.-led invasion in March 2003, representing an increase of between 760 and 836 deaths in the last 5 weeks. According to the U.S. Defense Department, 4,367 American se

rvicemembers have been killed in Iraq, representing 16 servicemember deaths in the last 5 weeks. (As posted, U.S. troops are the only foreign forces remaining in Iraq.)
by Diane Marie Amann at 6:16 AM